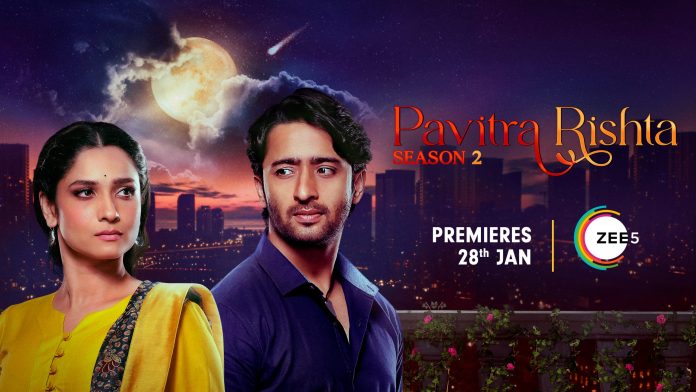 The 8-episode series, created by Ekta Kapoor, will premiere on ZEE5 Global on 28th January, 2022.

In 2009, ZEE TV and Ekta Kapoor curated a show titled Pavitra Rishta which ran for 5 long years on the channel and made Archana Deshmukh and Manav Deshmukh an iconic couple everyone looked up to. The show lived in the hearts of the fans for many years so much so that Ekta Kapoor and ZEE5 Global, the largest streaming platform for South Asian content, decided to keep the legacy on by renewing the show as a streaming series, and naming it Pavitra Rishta… It’s Never Too Late.

While Ankita Lokhande reprised her role of Archana Deshmukh, Shaheer Sheikh stepped into the shoes of Manav Deshmukh and together they captured people’s hearts and minds. The new season of the series is set to premiere on 28th January.

Season 2 is centred around Manav and Archana, and how their marriage, which was based on a sham, falls apart only for them to realise that their Pavitra Rishta was never bound by just vows and responsibilities. It was in fact woven with love and faith so strong that even destiny had to re-write its plan for them. As seen in the trailer, Manav and Archana’s story in season 2 starts from where their marriage ended, and they went their individual way only to cross paths time and again. While they never stopped loving each other and waiting for each other, will they find their way back to each other as lovers and soulmates?

Archana Anand, Chief Business Officer, ZEE5 Global, said, “The half a decade legacy created by Pavitra Rishta has given rise to much fandom for the show across the globe. After the huge response received on the first season of the renewal, we are delighted to bring to audiences the new season of the series. The story of Manav and Archana has struck a chord across viewers in 190+ countries, and we look forward to bringing them their favourite couple again to their personal screens with Season 2.”

Ankita Lokhande said, “Shooting for Pavitra Rishta is like coming home as Archana’s character feels like a second skin to me. This show changed my life back in the days and this time around too, it has proven extremely lucky for me as it has reinstated my faith in love, second chances and that it’s never too late. So, it gives me immense joy to announce that your favourite show is back with a new season, 8 fresh episodes, the same old Archana-Manav chemistry, and renewed drama. We hope that you feel the love we felt while shooting for this series”.

Shaheer Sheikh said, “I was stepping into unknown shoes in the first season but the love from the fans made me realise that there is a Manav in me. Manav’s innocence and relatability struck a chord with many hearts, and I hope that the viewers continue to love and accept him in the new season”.

Actor turned producer Bhairavi Raichura’s 24 Frames Production has helmed the digital series which will be exclusively available on ZEE5.