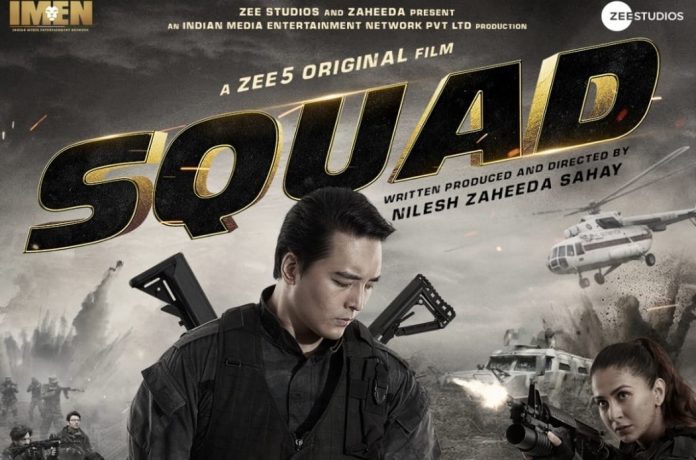 Billed as the biggest action film of 2021, Squad is produced by Zee Studios and Indian Media Entertainment. The trailer seems set to break records with its high-scale, high-octane and high-magnitude action sequences. It gives a glimpse of the incredible action sequences which involve MIG 8, helicopter chases and 400 soldiers in an intense climax scene. It also portrays the emotional bond between Rinzing and the child artist, Dishita Jain.

Talking about the film, producer, director and writer, Nilesh Sahay said, “After so many challenges due to pandemic, our labour of love is finally ready. It is a film made with a lot of passion and the hard work that has gone into creating the thrilling action sequences is there for everyone to see. I would like to see people giving their love to Rinzing, Malvika, the cute child artist and the whole team that has given their blood and sweat for the film. Over to you all now so please do watch it on ZEE5.”

Rinzing Denzongpa called working on Squad “an enriching experience”. “There is a lot of excitement to see how people would respond to the film and I really hope that they watch it on ZEE5 and like it. I have personally learnt a lot through the journey of Squad, and it has been an enriching experience,” he said.

Malvika Raaj shared, “I never knew I had so much of strength when I was told the film will involve me doing lot of action with Rinzing. But Nilesh really believed in us more than we believed in ourselves and that really helped. I hope people would give me as much love as they gave me for Kabhi Khushi Kabhie Gham (2001) back then.” For the uninitiated, Raaj played young Poo in Karan Johar’s film.

Pooja Batra said that she is “beyond excited for her next release Squad”. “I have done a movie after so long and I can’t wait for everyone to see me in it. Everyone in the movie is top shelf and have done such an amazing job especially my director Nilesh Sahay,” she said.