Home Arts and Culture Ajith Kumar: Leader of the pack 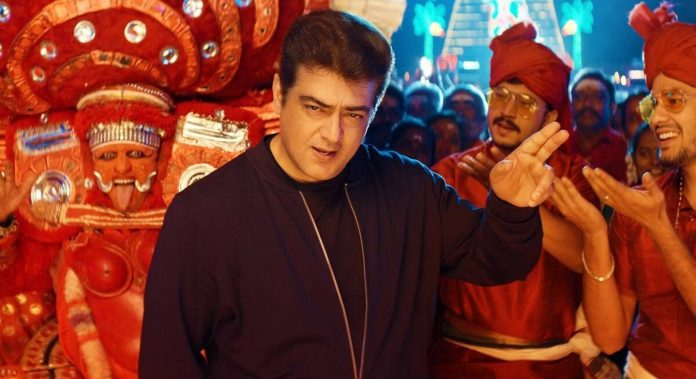 ACTOR Ajith Kumar is one of the biggest names in Indian cinema and carved out an impressive career that has included countless blockbuster hits like action entertainer Valimai, which clocked up huge box office numbers earlier this year.

The mega-movie star will turn a year older on May 1 and receive a tidal wave of good wishes from around the world.

Eastern Eye decided to get involved with his 51st birthday celebrations by presenting an all you need to know A to Z about the Tamil cinema giant.

A is for Amaravathi: The first film Ajith Kumar signed as a lead role was Prema Pusthakam (1993), but the shoot was stalled due to the director’s death, so his official debut release as a hero was Amaravathi (1993). His voice in the film was dubbed by actor Vikram, who would later become a big star in his own right.

B is for Bollywood: The actor stayed away from Bollywood and concentrated on Tamil cinema. His only major Hindi cinema appearance was as the antagonist opposite Shah Rukh Khan in Asoka (2001). He has appeared in a few successful  Tamil adaptations of Bollywood films, including Paramasivan (2006), which was a remake of Kartoos (1999), and Pink (2016) remake Nerkonda Paarvai (2019). His film Aegan (2008) was a remake of Shah Rukh Khan starrer Main Hoon Na (2004). Some of his movies have been remade in Bollywood including Kadhal Kottai (1996), which inspired Sirf Tum (1999).

C is for Commercial success: The first big success of the actor’s career was 1995 romantic thriller Aasai, which was later remade in Bollywood as Pyaar Zindagi Hai (2001). Interestingly, the film was supposed to launch actor Suriya, but he turned it down and Ajith Kumar landed the star-making role after being spotted in an advert. Also, the actor once admitted to only doing his early films to clear debts and considered quitting the profession until Aasai became a hit.

D is for Dual role: The actor played the first of his dual roles in blockbuster hit Vaali (1999). His portrayal of two brothers earned him his first major acting honours, including a Filmfare South Best Actor – Tamil award. Talking of dual, his films Mugavaree (2000) and Kireedam (2007) were filmed with two different endings, each.

F is for Family: The actor started dating his co-star Shalini during the shooting of their film Amarkalam (1999). He proposed to her in June 1999, and they married in April 2000. The couple welcomed daughter Anoushka in 2008 and son Aadvik in 2015.

G is for Guest appearance: The actor has done great cameos across the years and perhaps the most memorable was of a flight passenger opposite Sridevi, in the Tamil version of Bollywood film English Vinglish (2012), originally portrayed by Amitabh Bachchan.

H is for Hyderabad: The popular actor was born Ajithkumar Subramaniam on May 1, 1971, in Hyderabad and grew up as the middle son of three brothers. He dropped out of school and did various odd jobs, which included apprenticeships and setting up a textiles business before working as a model, which eventually led to acting.

I is for Interviews: The notoriously media shy actor rarely gives any interviews and believes in letting his work speak for itself. Not doing film promotion interviews like other stars hasn’t affected his success rate.

J is for Jokes: Although the actor is predominantly known for action movies, thrillers, and intense dramas, he also has great comic timing and that was illustrated with laughter-filled film Veeram (2014). The action-comedy was remade in Telugu (Katamarayudu) in 2017 and in Kannada (Odeya) in 2019. A Bollywood adaptation headlined by Salman Khan titled Kabhi Eid Kabhi Diwali is reportedly on the way.

K is for Kandukondain Kandukondain (2000): This successful Tamil language film based on Jane Austen classic Sense And Sensibility saw the actor star opposite Bollywood leading ladies Aishwarya Rai and Tabu. The romantic drama won a Filmfare Best Tamil Film award and was a global success, including with cross-over audiences.

L is for Looks: The actor hasn’t been afraid to experiment with different looks across the years. The film that perhaps showed off that chameleon-like ability most was blockbuster hit Citizen (2001). The film required him to play multiple personas with decidedly different looks and showed how much of an accomplished actor he is.

M is for Motor racing: Ajith Kumar is the only frontline film star in India to carve out a career as a racing car driver. He has competed in high-profile races like the Formula 2 championship and once admitted that his first career choice was to be a professional motor racer but he couldn’t pursue it due to a lack of sponsors.

N is for No: The in-demand actor has rejected a lot of high-profile films throughout his career, which include super hits like Nandha (2001), Kaakha Kaakha (2003), Ghajini (2005) and Naan Kadavul (2009). He has also reportedly rejected lucrative endorsement deals and live shows throughout his career to concentrate on acting and race car driving.

O is for Open letters: The actor not doing interviews or being on social media means that when he does rarely break his silence it is with open letters shared by his management. These letters have included him asking fans for patience, not to call him Thala (see T) and recently a statement to mark 30 years in cinema.

P is for Philanthropy: The big-hearted star has done work for charitable causes throughout his career and at the forefront has been his non-profit organisation Mohini-Mani Foundation, which is named after his parents. The charity promotes initiatives like self-hygiene, civic consciousness and helping the under privileged.

Q is for Quotes: The actor not giving many interviews hasn’t stopped a page being dedicated to him on popular site Brainy Quote. One of his best quotes is, “success is like a wild horse. If you do not know how to handle it, it will throw you off and look for another rider who can handle it well.”

R is for Remakes: Many of the popular actor’s films have been remade in other languages, with Telugu adaptations being the most prominent. The actor has starred in successful remakes himself with the most notable being action thriller Billa (2007), a reboot of a 1980 Tamil film of the same name, which itself was inspired by Bollywood film Don (1978). That smash hit film spawned the prequel Billa II (2012).

S is for SP Balasubrahmanyam: An early champion for the actor was SP Balasubrahmanyam. The legendary singer’s son was a classmate of Ajith and through his recommendation, he landed his first two films Prema Pusthakam (1993) and Amaravathi (1993).

T is for Thala: The actor earned the nickname Thala (leader) after the success of his 2001 film Dheena, which redefined him as an action hero for the masses. In 2021, he requested fans and media to stop calling him Thala, and refer to him just as Ajith, Ajith Kumar, or AK.

U is for Ullaasam: The actor has a strong connection to Bollywood legend Amitabh Bachchan, having portrayed his roles in the Tamil remakes of Pink and English Vinglish. Their association started with 1997 film Ullaasam, which was Bachchan’s first Tamil language film production under his banner. Ajith Kumar played the lead role, but the film was beset by problems, and he was badly injured during the making of it.

V is for Villain: For his 50th film Mankatha (2011), the heroic actor surprised everyone by playing a memorable anti-hero. His villainous role in the heist thriller not only resulted in the movie becoming a blockbuster hit, but also inspired other leading men in Tamil films to play grey-shaded characters. His bad guy role also introduced audiences to a salt and pepper hair look, which would remain in subsequent films.

W is for Writer: The 2010 action thriller Aasal was the first film he was credited with the story, dialogues, and screenplay.

X is for X-Factor: The actor has formed a strong connection to audiences because of his relatability and an amazing ability to keep it real while doing larger-than-life scenes. He does his own stunts whenever possible, including high speed motorbike and car chases, and refuses to use a body double.

Y is for Yennai Arindhaal: Director Gautham Vasudev Menon had delivered police thrillers Kaakha Kaakha (2003), headlined by Suriya, and Vettaiyaadu Vilaiyaadu (2006) with Kamal Haasan in the lead role. He rounded off his police trilogy with Yennai Arindhaal (2015), which saw Ajith Kumar play a former police officer, who tries to protect a young woman from an evil criminal linked to his past. The acclaimed film got multiple award nominations and there were talks of a sequel after it released.

Z is for Zodiac: The actor is a Taurus and traits associated with the star sign include reliability, practicality, ambition, independence, and generosity. They are also dependable, loyal, hardworking, steadfast, down to earth, patient, and persistent. He has used theses quality to reach cinema greatness and we give him a birthday salute.