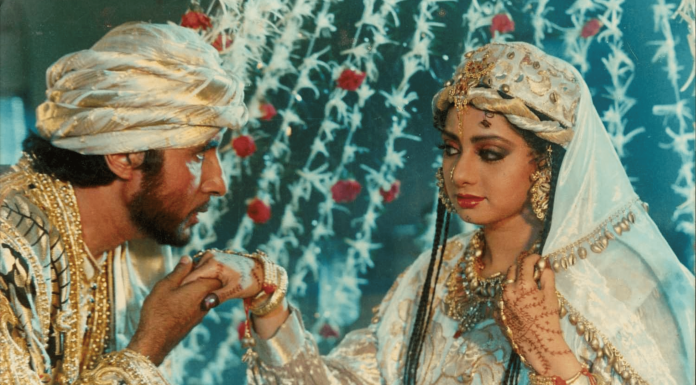 The story of a fearless Afghan tribal leader, who gets trapped in an Indian jail after trying to fulfil a promise to a rival female chief he has fallen for, starred Amitabh Bachchan, Sridevi, Danny Denzongpa, Kiran Kumar and Nagarjuna. The masala film filled with action, unforgettable music, romance, adventure, emotion, powerhouse performances and a spectacular showdown became an iconic classic.

Eastern Eye decided to mark three decades of the film released on May 7 1992, by presenting 30 fun facts about it.

1. The film was originally launched in 1988 with the title Qaidi No. 786. Bachchan’s character name Badshah Khan was also considered for the title.

2. His Badshah Khan looks were initially designed for Subhash Ghai’s shelved film Devaa and the director was reportedly upset on seeing them in Khuda Gawah. The look later inspired Amitabh Bachchan’s appearance in Thugs Of Hindostan (2018), in which he is interestingly called Khudabaksh and also makes his entry on horseback. 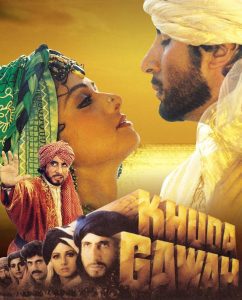 3. The Khuda Gawah title was taken from a shelved 1978 Manmohan Desai film of the same name, which was supposed to star Amitabh Bachchan in a double role, but with a completely different story. As a thank you, the film was dedicated to Desai.

4. In the original version, Bachchan was supposed to just do a guest appearance, but it was extended to a full-fledged role.

6. Dimple Kapadia was first choice to play the lead and Madhuri Dixit was also considered, before Sridevi was finalised for the double role.

7. Sridevi would become the first female to play a double role in an Amitabh Bachchan starrer. Both were earlier supposed to play double roles in Ramesh Sippy’s Ram Ki Seeta Shyam Ki Geeta, but that film had got shelved.

8. Dilip Kumar’s niece Shaheen was considered for the film, but ultimately not signed.

9. Sanjay Dutt was originally cast in the film but walked out after shooting some portions because of his disagreements with director Mukul S Anand.

10. Jackie Shroff was approached as Dutt’s replacement but didn’t have spare dates. Chunky Pandey and a young Ajay Devgn were also considered, but the role went to Nagarjuna after Sridevi recommended him.

11. According to reports at the time, an angry Ajay Devgn had accused Sridevi of getting him thrown off the film because he was a newcomer.

12. Actresses Neelam and Farah had been offered Shilpa Shirodkar’s role, but they declined.

13. Over a million people turned out to see Amitabh Bachchan when he arrived in Afghanistan to shoot.

14. Khuda Gawah was only the second major movie after Dharmatma (1975) to have been shot in Afghanistan. Interestingly, Danny Denzongpa played key supporting roles in both.

15. The then Afghan President Najibullah Ahmadzai was a die-hard Bollywood fan and provided full security for the film unit, including the country’s air force. He also honoured the lead stars with Order Of Afghanistan medals before they left.

17. A song featuring Shilpa Shirodkar was shot, but later dropped from the final cut, owing to the film’s length.

18. Amitabh Bachchan was gifted a beautiful horse as a token of appreciation by a highly influential man in the Baghlan province. Sadly, he couldn’t take the horse to India.

19. An audio album featuring Amitabh Bachchan’s dialogues from the movie as Badshah Khan was also released. 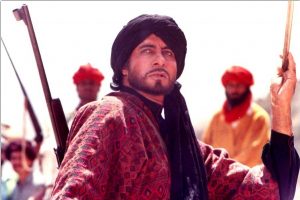 20. The critically acclaimed drama was the third highest grossing Bollywood film of 1992.

21. It became the most popular Bollywood film ever released in Afghanistan and ran to packed houses in Kabul for 10 weeks.

22. The film was nominated in all the performance categories at the Filmfare Awards, including Best Actor (Amitabh Bachchan), Best Actress (Sridevi), Best Supporting Actress (Shilpa Shirodkar) and Best Villain (Kiran Kumar). The only one to win was Danny Denzongpa for Best Supporting Actor.

24. Insaniyat had been shot earlier and released in 1994, but Khuda Gawah was the last film Bachchan had signed before he took a long sabbatical from Bollywood.

25. The movie had already released in Canada on video in May 1992, but due to high public demand premiered at the Robson Square Theatre, Vancouver, in November 1992, and screened every weekend until May 1993.

26. The film was dubbed in Telugu and later inspired a 2007 Pakistani drama series of the same name.

27. The producer Manoj Desai was once president of The Amitabh Bachchan Fan Club and even toyed with the idea of making a Khuda Gawah sequel many years later.

28. The film’s popular number Tu Mujhe Kabool was sampled by DJ Sanj for his song Dil Ki Baatein, which featured the singer Karamel.

29. The music played when Badshah Khan first sees Benazir was recreated for the dramatic scenes between Karthik and Nusrat in Sonu Ke Titu Ki Sweety.

30. Amitabh Bachchan’s presence in Afghanistan during the making of Khuda Gawah led to some peace and calmness in the troubled nation. This was perhaps a historical first. And today peace is needed more than ever, in Afghanistan as well as the world over.