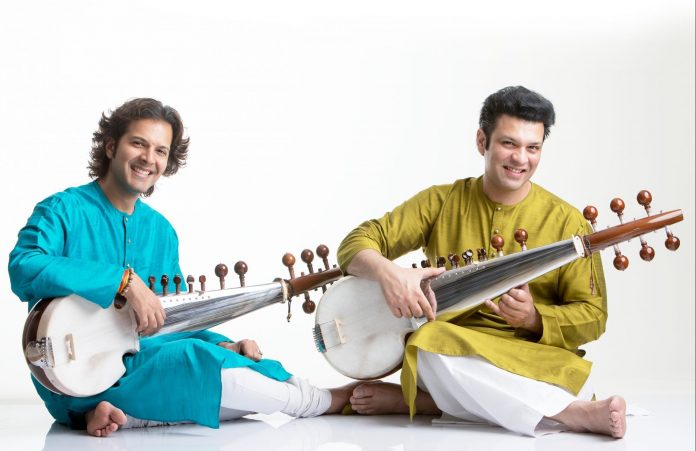 Their newly released EP, We For Love, raises awareness about the Justice For Every Child campaign launched by Noble peace prize recipient Kailash Satyarthi, which works to ensure victims of child sexual abuse and rape get justice, mental health support and a path towards living with dignity.

The cause is clearly close to their hearts, and they see it as a defining journey for them as artists and fellow human beings. The six-track release features big names they see as game-changers, like Karsh Kale, Malini Awasthi, Mahesh Kale, Shubha Mudgal, and their legendary father Ustad Amjad Ali Khan.

Eastern Eye caught up with the dynamic musical duo to discuss their musical journey, new EP, love for performing live and key lessons learned from their father.

How do you look back on your musical journey?
Amaan: I feel like a humble custodian of a special art form. Life itself is a learning experience, so much more beneficial to remain a student.
Ayaan: Apart from the humanity and compassion, I learnt that being a musician is a blessing as you are really not answerable to anyone but yourself. For those few hours when you are on stage, you are in a creative frenzy, sometimes supernaturally unreal. There are times when you get off stage only to realise that something special happened.

What has been your own most memorable moment?
Ayaan: So many. I can only say that God has been very kind! I feel extremely blessed and only have gratitude.
Amaan: We feel blessed to have received so much love and warmth from music lovers. Through our collaborations, the aim is to preserve the essence of both Indian and western traditions, so they can flow into each other without artistic compromise. Moments I cherish include the Nobel Peace concert, EP with Joe Walsh and the UN Day.

What led towards your recent EP?
Amaan: The EP aims to raise awareness and proceeds for the Justice For Every Child campaign, launched by Kailash Satyarthi Children’s Foundation. We were honoured to perform at the Nobel Peace Prize ceremony and Peace Prize concert back in 2014 when Kailash Satyarthi and Malala Yusufzai got the Peace Prize; so ever since we wanted to take forward the message of Satyarthi Foundation. We For Love was an idea that became a reality very organically. 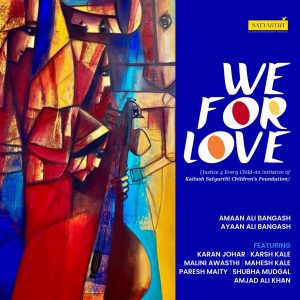 How did you decide which names to bring on board for the EP?
Ayaan: Music is a powerful medium that connects humankind. No one has the right to take a child’s innocence away. The idea was to create endless pathways to make a positive impact, which is both uplifting and action inspiring. It was always a desire to work with all these artists and perhaps it took a sentiment as powerful as this to get us all together.

Who are you hoping connects with these compositions?
Amaan: Music lovers have to be free enough to respond openly to what they hear based on the energy created in them by the music. It is this free flow that creates a true and lasting relationship between the music, musician, and people. Every human being is born with sound and rhythm. Some realise this and some don’t. The heartbeat is an indication of rhythm and what we speak; conversation, recitation, chanting, and singing are all part of music.

What are the key messages you want to convey through this EP?
Ayaan: Children are our future, and their protection is an issue which should concern us all. Kailash Satyarthi Children’s Foundation’s Justice 4 Every Child campaign has been working towards providing legal and mental health support to child victims of sexual abuse by intervening in 5,000 strategic cases across 100 districts in the country.

What keeps you and your brother connected musically?
Amaan: We have been on stage for over 25 years! A lot has changed, and social media has impacted classical music. However, classical music is not a commodity that it needs to be promoted. Yes, it needs to be initiated. But the music needs to flow, speak for itself, and encourage the masses to listen on the basis of its intrinsic melody. Our nature reflects into our music; hence when we play together.

What has been your most memorable live performance?
Amaan: There have been so many! Our works with guitarist Derek Trucks of the Allman Brothers Band, Joe Walsh, (guitarist) Sharon Isbin, Chicago Philharmonic Orchestra, Avignon Symphony Orchestra, my father’s Concerto Samaagam with New Jersey Symphony Orchestra with conductor Xian Zhang, Moscow State Philharmonic Orchestra, Adelaide Symphony Orchestra and the UN Day Concert with the Refugee Orchestra Project. And so many more.
Ayaan: Music is who we are and reflects in our music. As siblings, we know each other’s mind on stage. There is no rehearsal! The idea when we play duets is to create a bouquet of flowers.

What is the biggest musical life lesson you learned from your legendary father Ustad Amjad Ali Khan?
Ayaan: My father in fact has traditionally been ‘outside the box’. He enjoys all his collaborations and wants to reinvent his ideas and thoughts constantly. From the time we were born, the language spoken was music. The air that we were breathing was music. We took shape of the vessel like water. Though our father has been a very strict traditionalist, he’s always believed in adapting to change. Over the years, we have tried our best to make the sarod reach out to a new audience that perhaps would not be at a classical concert. Music is who we are, and our nature reflects in our music.
Amaan: Being Ustad Amjad Ali Khan Saheb’s son is a great honour. I feel highly privileged that God gave me the opportunity to be born to him. My father’s music is of course the real inspiration, but so is his humility, simplicity, and politeness. Almost unreal for a man of his stature.

Your mother has played a major role?
Ayaan: Yes, being an artist herself who learnt from the great Rukmini Devi Arundale, she sacrificed her career for the family. Today, what we are, who we are is all her contribution. As our father says, a mother is every child’s first guru.

Tell us about your relationship with your father?
Amaan: The relationship was more of a father-son than a teacher-disciple. He has been the most patient teacher and most loving father. Abba’s teaching and philosophy is beyond music. It’s a way of life. It was as natural as that. Though there was no pressure, it was understood. The mantra taught by our parents has been to be a good human being first and good music will follow.

Why should we pick up your new EP?
Ayaan: The appeal of socially conscious music is widespread, and we are happy to contribute to this revolution time and again. We thank every artist on the project for whole-heartedly participating in the process and making this EP one of our most memorable collaborative pieces. You could call it an experimental EP that embraces an eclectic mix of collaborators.

Why do you love music?
Amaan: It’s a blessing to be in a profession of what you love doing. It is also a non-debatable factor that music is indeed the best way to connect to that supreme power that we have never seen. Be it any religion, music has always been the pathway to spirituality. Its therefore not time bound but a part of a larger journey.
Ayaan: Music is why I am here. It’s my way of life. It’s my prayer and my God. When music becomes the language of love and justice