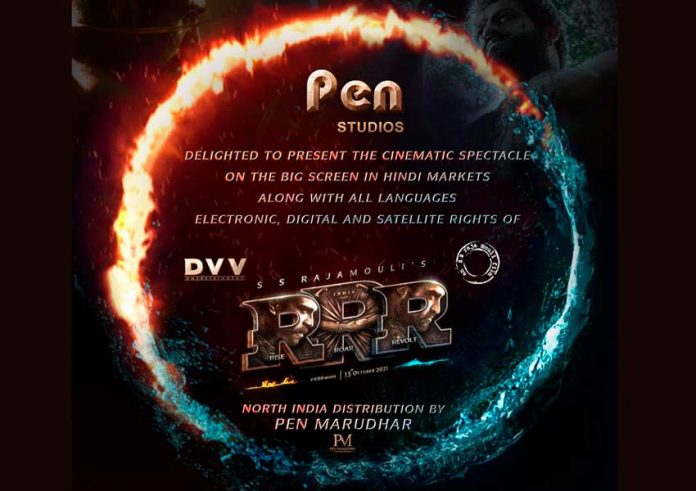 RRR, directed by SS Rajamouli who shot to international fame after the huge success of Baahubali: The Beginning (2015) and Baahubali: The Conclusion (2017), has been creating great buzz ever since its inception.

The much-awaited magnum-opus is back in news once again as its North Indian theatrical rights, along with electronic, satellite and digital rights, have been acquired by Pen Studios, led by Dr. Jayantilal Gada. The Tamil distribution rights of the mega-budgeted film were earlier picked up by Lyca Productions.

“I am happy to have Jayantilal Gada and Pen India Ltd associate with us to take the film to the North Indian audience,” Rajamouli said in a statement.

Dr. Jayantilal Gada, Chairman & M.D. of Pen Studios, added, “I would like to thank SS Rajamouli, D.V.V. Danayya, SS Karthikeya and the entire team for placing immense trust and faith in us and choosing us to partner with this dream project.”

The film was earlier slated to release on 30 July last year, but its filming came to a grinding halt due to the sudden outbreak of the coronavirus pandemic and subsequent lockdown in India. The team eventually resumed production in October. It is now set to hit screens worldwide on October 13.

After RRR, SS Rajamouli is set to helm a film for veteran producer KL Narayana. It stars Mahesh Babu is the lead role.