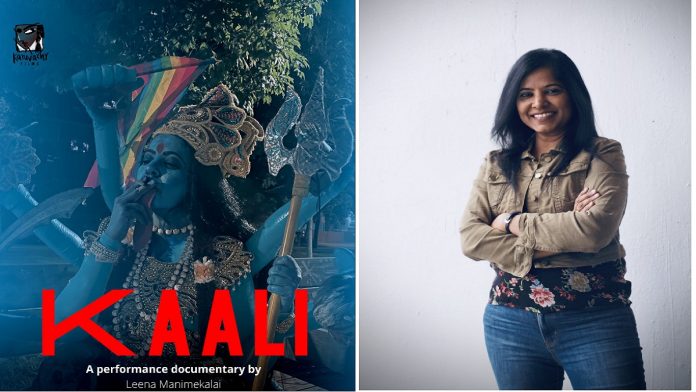 The Indian High Commission in Canada on Monday urged the Canadian authorities to withdraw the ‘disrespectful depiction of Hindu Gods’ in the poster of Kaali, a film showcased as part of the ‘Under the Tent’ project at the Aga Khan Museum in Toronto.

The poster that was tweeted last Saturday showed a woman dressed as the Hindu Goddess Kali smoking a cigarette and holding a pride flag representing the LGBT community in her hand.

The Commission’s request came after the poster stirred a big controversy on social media that led to a police complaint against the documentary maker Leena Manimekalai.

“We have received complaints from leaders of the Hindu community in Canada about the disrespectful depiction of Hindu Gods on the poster… We are also informed that several Hindu groups have approached authorities in Canada to take action,” the High Commission said in a press release.

“We urge the Canadian authorities and the event organizers to withdraw all such provocative material,” the Indian High Commission in Canada press release added.

Uttar Pradesh Police has lodged an FIR against director Leena Manimekalai for deliberately hurting religious sentiments by tweeting a poster of her new documentary film, where a woman dressed as the Goddess is shown smoking a cigarette.

An FIR was registered on July 4 at Hazratganj Police Station on charges of criminal conspiracy, offense in the place of worship, deliberately hurting religious sentiments and intention to provoke breach of peace against the filmmaker.

Kaali was first screened during Rhythms of Canada, a week-long festival celebrating multiculturalism, at the Aga Khan Museum in Toronto last weekend.

Manimekalai, who was born in Madurai in Tamil Nadu and is currently based in Toranto, said she will continue to use her voice fearlessly till she is alive. “I have nothing to lose. Till the time I live, I wish to live with a voice that speaks what I believe without fear. If the price for that is my life, it can be given,” Manimekalai wrote in a Twitter post in Tamil in response to an article on the controversy.

“The film is about the events during Kaali’s strolls through the streets of Toronto city one fine evening. If they watch the movie, they will put the hashtag ‘love you Leena Manimekalai’ rather than ‘Arrest Leena Manimekalai’,” she added in reply to another article.