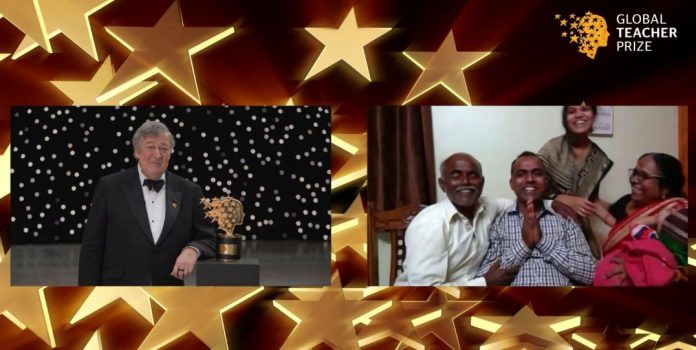 INDIAN village teacher Ranjitsinh Disale has won this year’s Global Teacher Prize worth $1 million, for his work helping girls at a village school in western India.

Disale immediately announced he would share the prize money with the nine other finalists.

He was honoured for having ‘transformed the life chances’ of girls at the Zilla Parishad primary school in Paritewadi, in Maharashtra state, prize organisers said.

The announcement was made by actor and writer Stephen Fry at a virtual ceremony broadcast from the Natural History Museum in London. A jubilant Disale heard the news at home in India, surrounded by his family.

He started teaching at the school in 2009, when it was in a rundown building next to a cattle shed, according to organizers. School attendance was low and teenage marriage common.

The curriculum was not even in the girls’ main language, Kannada. Disale moved to the village, learned the language and translated the class text books.

He also introduced digital learning tools and came up with personalised programmes for each student. His system of QR Coded Textbooks is now used across India.

School attendance is now 100 per cent, and one girl from the village has graduated from university, the organisers said.

Disale also initiated environmental projects in the drought-prone district, while his “Let’s Cross the Borders” project connects young people from India and Pakistan, Palestine and Israel, Iraq and Iran, and the US and North Korea to promote world peace.

In his winner’s speech, Disale said he would share half the prize money with his nine fellow finalists, meaning they would receive about $55,000 each. The award was established by the Varkey Foundation and is given in partnership with UNESCO.