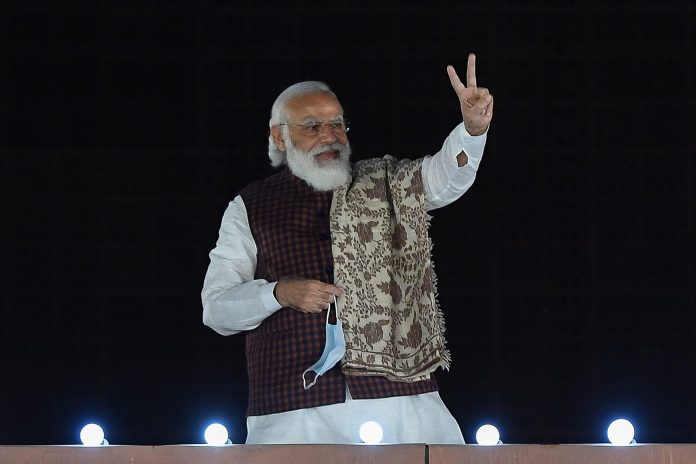 Prime minister Narendra Modi attended the groundbreaking ceremony on Thursday (10) for a huge new Indian parliament, the centrepiece of a grand but contentious redevelopment of New Delhi’s colonial-era core.

Critics say the 200 billion rupees ($2.7 billion) that the government is reportedly spending on the vast project could be better directed to fighting Covid-19 and repairing the pandemic-battered economy.

Modi performed Hindu rites to Sanskrit chants in a ceremony that was largely symbolic as India’s top court has banned any construction work until a raft of legal petitions against the mega-project are dealt with.

The prime minister’s decision to perform a Hindu ceremony drew fire from some critics as India’s parliament is meant to safeguard the officially secular traditions of the multi-faith democracy of 1.3 billion people.

It also came as tens of thousands of farmers angry at new agricultural laws blockade the capital, in a major challenge to the authority of Modi and his reform agenda.

Due for completion in 2022 when India marks 75 years of independence, the much larger new parliament will replace an old building that Modi said Thursday “needs rest”.

Designed by British architect Edwin Lutyens in the early 20th century as the commanding centrepiece of the Raj, the area also comprises the grand Rajpath boulevard, the president’s residence, government offices, the national museum and the India Gate war memorial.

Modi’s root-and-branch overhaul of the sweeping, tree-lined and lawned vista will see it enclosed by rows of imposing new government buildings and the prime minister’s office shifted and enlarged.

Some of the old parliament will be “retrofitted” and continue to be used for government business, while other buildings will reportedly be turned into museums. Some will be demolished.

“Today is a historic day. It is a milestone in India’s democratic journey,” Modi, 70, said in a speech.

But there has been a chorus of criticism, not just against the price tag, which is expected to be 9.7 billion rupees ($130 million) for the triangular parliament complex alone.

Tikender Singh Panwar, an opposition politician and an expert on urbanisation, told AFP the redevelopment was a “big scandal in the making”.

“Curiously, for a project of this significance, size and cost, the details are sketchy… I see this as a fascist leader wanting to leave an imprint of his glory on Delhi,” he said.

Political commentator Arati Jerath said the redevelopment signalled the “making of a new India that will bear Modi’s imprint”.

“This money could have been well spent on healing and repairing the economy (and) creating jobs but instead of which it is being spent on fulfilling one man’s grandiose dreams of what a new India should look like.”

There have also been allegations the new parliament’s architect was chosen because he is a close friend of Modi, accusations the government denies.

Some opposition parties criticised Modi’s participation in a Hindu ceremony, flanked by saffron-robed priests chanting in Sanskrit, the classical language that his government wants to revive.

Hindus form the majority of India’s population and many religious minorities, in particular the 200 million Muslims, fear that Modi wants to remould India as a Hindu nation.

But the inauguration was also attended by representatives of other faiths who offered prayers after Modi led the main ceremony live on national television.

The project has also run into legal trouble with several petitions in India’s top court questioning its validity on the grounds of land and environmental rules.

The Supreme Court has allowed paperwork and other procedures — including Thursday’s ceremony — to go ahead but construction cannot begin until a ruling.