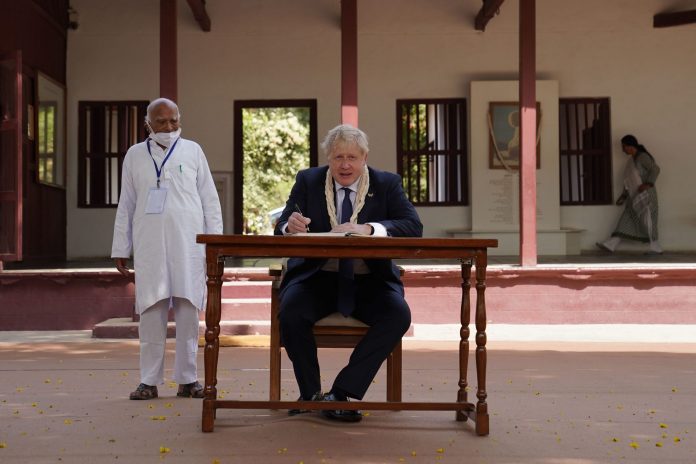 British prime minister Boris Johnson faces calls to apologise for a colonial-era massacre during his visit to Gujarat on Thursday, 100 years after as many as 1,200 people were killed protesting against imperial rule.

According to the Gujarat state government, British major HG Sutton ordered his troops to open fire.

“Like a battlefield, the entire area was filled with corpses,” it said. Two wells, it added, were “overflowing with bodies”.

The state’s official float at this year’s annual Republic Day parade depicted the killings as the “untold story of bravery and sacrifice of the tribals”, it said in a statement that put the death toll at 1,200.

Johnson – who has been assailed by controversy over Downing Street parties during the coronavirus pandemic – is in Gujarat’s largest city, Ahmedabad, on Thursday at the start of a two-day visit to India.

“It was the British rule at the time when these killings happened so, if the British PM is coming here, he must apologise,” Tejawat’s grandson Mahendra said.

“My grandfather was only running a campaign for the poor, harmless and illiterate tribals,” added the 77-year-old.

“He must express regret if he feels what happened to the defenceless tribals was wrong.”

Portraits of Johnson lined the streets of New Delhi ahead of his visit.

But relations between Britain and India have long been coloured by the legacies of colonial rule — when London saw the world’s second-most populous nation as the jewel in the crown of its empire but hundreds of millions of Indians chafed under its authority.

It has built giant statues of key independence leaders, and created a museum to one of them in Delhi’s world heritage-listed Red Fort.

Modi is himself a former chief minister of Gujarat, under whose tenure a memorial was built to the massacre victims.

But Arun Vaghela, head of Gujarat University’s history department, has little expectation the British prime minister would address the issue.

He has carried out field research at the site and said even 20 years ago residents were still finding old bullets lodged in trees and skeletons in deep wells, into which people had jumped to try and escape.

“The British records only show 40 to 50 deaths — but when does any killer government, British or otherwise, ever truly reveal and acknowledge the number of people it has killed?”

Media reports say some of the protesters were armed and may have fired first, and that British authorities put the number of dead at 22.

According to Vaghela’s figures, the toll is greater than the far better known Jallianwala Bagh massacre in Amritsar in 1919, when between 379 and 1,000 people were killed, which overshadowed a state visit by the Queen and Duke of Edinburgh to India in 1997.

But the Gujarat incident barely figures in India’s independence narrative, and the victims’ tribal status may have condemned them to a historical footnote.

Tribal people are outside Hinduism’s caste system and many are still deeply poverty-stricken, living on the margins of society.

“Tribals are at the bottom of Indian social pyramid,” said Vaghela. “Had something like that happened anywhere else, it would have been highlighted by the mainstream press and politicians for a long time.”

And for some, the time has come to move on.

Veteran journalist Vishnu Pandya, author of a Gujarati-language book on revolutionary places in the state, has collected many oral accounts of the killings from the tribal community, where he says the incident is detailed in multiple folk songs.

“The British PM who is coming here wasn’t even born at the time and he wouldn’t know anything about the incident,” he said.

“What is done is done, it’s history and we need to look ahead.”