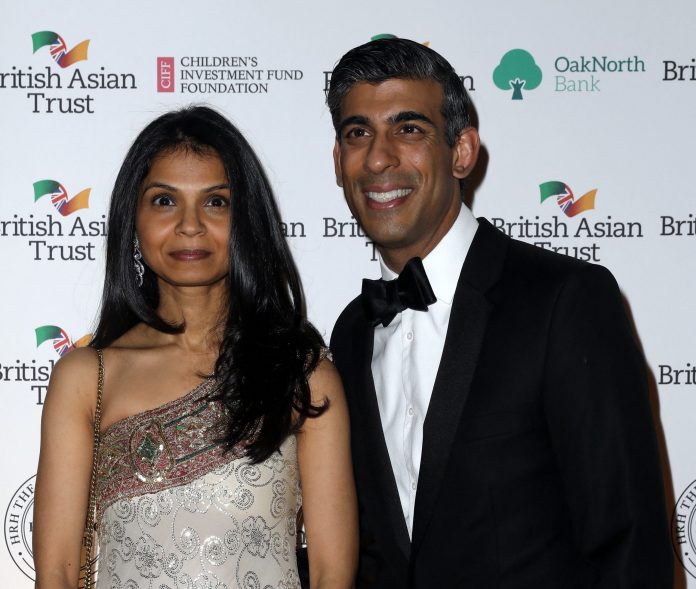 PRIME MINISTER Rishi Sunak and his wife Akshata Murty have made their debut on the Asian Rich List 2022, which profiles the 101 wealthiest Asians in Britain.

Sunak and his wife – whose father NR Narayana Murthy co-founded Indian IT major, Infosys – are ranked 17th in the list, with an estimated wealth of £790 million.

There are 16 billionaires (one more than in 2021) on the list, which is published by Eastern Eye.

As in previous years, the Hinduja family has topped the ranking with a fortune of £30.5 billion, followed by Lakshmi Mittal and his son Aditya (£12.8bn); Sri Prakash Lohia and family (£8.8bn) and Nirmal Sethia (£6.5bn).

Blackburn’s billionaire siblings Zuber and Mohsin Issa, who own Asda, are ranked sixth (£4.75bn); while discount retailer B&M’s Simon Arora and his brothers Bobby and Robin are in seventh position (£2.6bn).

Financier Cyrus Vandrevala and his wife Priya (£2.4bn); wholesaler Bestway’s Sir Anwar Pervez and his son Dawood (£1.9bn) and hotelier Jasminder Singh and his family (£1.5bn) round off the top 10 richest British Asians.

The executive editor of the Asian Rich List, Shailesh Solanki, said, “This year’s Asian Rich List once again demonstrates the remarkable resilience of Asian entrepreneurs. Despite a very challenging economic climate, we have seen a considerable appreciation of the total wealth of the entrepreneurs on our list.

“Our list showcases the success of Asian businesses in the UK and tells their extraordinary story in building thriving businesses that today touch every area of British life.

“Their inspiring stories show what can be achieved through relentless drive, energy and focus.”

Many of the business leaders on the list were present as the latest edition of the publication was unveiled at the Asian Business Awards last Wednesday (23) at a gala dinner in central London.

Sunak, who faced criticism for his family’s wealth during the leadership election earlier in the summer, told Eastern Eye at the time, “In our country, actually, people judge you ultimately by your character, and by your actions, not by what’s in your bank account.

“And people can see what I’ve done. They’ve seen me as a chancellor through a pretty tough period over the last two and-a-half years.

“I delivered for the country, particularly for those who really needed help.

“But I wasn’t born like this. I grew up differently and worked hard for what I have. And I’m proud of that. We should have a country that supports and celebrates people who are working hard and building a better life for them and their kids. That’s a very Conservative value, supporting that type of aspiration.

“I would want to build a government that supported that.”

His parents – his father Yashvir was a GP and his mother Usha ran a pharmacy – were from a middle-class background.

Similar to other Asians, they believed in providing a good education that would help their children become successful in their careers. Sunak’s wife too, was born in a middle-class family in Karnataka, south India, before Infosys became the IT major it is today, with a significant presence in India, UK and north America.

Murty’s shareholding in Infosys is estimated to be worth around £700m.

Sunak and his wife, both 42, who met as students at Stanford, also own properties in the UK and US.

Mittal and his son Aditya, who run ArcelorMittal, the world’s largest steel company, felt the impact of the RussiaUkraine war as their wealth plummeted by £1.4bn. Fortunes, rose, however, for Mittal’s brother-in-law SP Lohia (his wife Seema is Lakshmi’s sister) as their company Indorama reaped the benefits of rising fertiliser prices following the Ukraine conflict.

Online fashion retailer Mahmud Kamani, whose family is behind Boohoo, also saw a steep decline in his wealth – from £1bn in 2021 to £600m in 2022 – while Ranjit Boparan and his wife Baljinder, who head the 2 Sisters Group (suppliers of poultry products to most British supermarkets) are estimated to be worth £475m, down from £750m in 2021.

Some sectors did better than others, but there were some surprises, too.

Multiple lockdowns during the pandemic hit the hospitality industry hard. Hotel owners faced challenges this year too, as visa backlogs in the summer and the cost of living crisis in the autumn affected room bookings.

Yet Jasminder Singh, whose newest property, The Londoner, in the heart of Leicester Square, has reported 100 per cent occupancy at his luxury hotel. Initially estimated to cost around £350m to build, the final figure was closer to £500m.

Singh recalled the fallout from the pandemic: “We were not allowed to open. Occupancy during lockdown was zero. You had all the costs and no revenue.”

Another hotelier, Surinder Arora, has been busy with multiple ventures despite the prevailing economic climate.

Among his recent acquisitions has been the 1,100-acre historic Luton Hoo estate on the borders of Hertfordshire and Bedfordshire with its luxury hotel and golf course.

Arora also bought the C&L Country Club, with 34 acres of land in Hayes, opposite Northolt airport in London, and has added the County Mall shopping centre in Crawley, Sussex, to his portfolio.

And in his first venture outside the UK, he is building a new hotel at Dublin airport.

Britain’s wealthiest Asians have made their wealth in a variety of sectors – industry, IT, hospitality, care homes, pharmacy, fashion, travel and finance, among many others.

New entrant, Alim Janmohamed is the managing director of Demipower Group (rank 46, wealth of £345m). His family business, launched in 1989, is currently the second-largest KFC franchisee in the UK, operating 117 KFC restaurants across London, the Midlands, east Anglia, the home counties, western England and Wales.

Naushad Jivraj, of the Queensway Group, whose family is from Tanzania, has a portfolio of hotels, but also coffee shops and fast food restaurants.

Moonpal Singh Grewal has developed Domino’s Pizza in the UK as one of its biggest franchisees. It was Lord Rumi Verjee who first brought the franchise to the UK in the 1980s. He is ranked 50, with a fortune of £325m.

Diversifying, acquisitions and selling off are part and parcel of a business and Asian entrepreneurs are no different. Having built their empires from scratch, many have gone on to sell their ventures and turn their attention to either philanthropy or something new.

Dr Nikesh and Moni Kotecha (rank 47, wealth of £340m) of Morningside Pharmaceuticals and his brothers-in-law, Danesh and Sanjay Gadhia (rank 70, £215m), of Morningside Holdings sold their company in October to Aspire Pharma in an undisclosed deal.

Overall, most entrants increased their wealth or saw that it remained at the same level as 2021.

As the UK steps into a new year, one businessman was rather prescient.

In candid remarks. Apurv Bagri, (rank 29; £500m), told the Asian Rich List, “The credibility of the UK has taken a hammering in the last few months. Britain, seen as a place of political stability, has now become not a laughing stock.”

At the recently concluded G20 summit in Bali, Indonesia, Sunak conceded that the UK’s international reputation has taken “a bit of a knock”.

However, he also expressed optimism over the proposed free trade agreement with India, following a meeting with prime minister Narendra Modi.

Downing Street said in a statement after the leaders met that “they looked forward to the agreement of a UK-India free trade deal, which has the potential to unlock investment and increase jobs in both our countries, as well as expanding our deep cultural links.”

From business to philanthropy

AT A time when the stance on immigration is again hardening, it is worth noting how many of those on the Asian Rich List arrived in Britain from Africa, and to a lesser extent, from the subcontinent, with virtually no money.

Having built multimillionpound enterprises within one generation, they are – having passed the baton on to the younger generation – now focusing their efforts on philanthropic causes.

Others are investing in the UK and abroad, and creating employment opportunities for many.

Sir Anwar and his son Dawood, along with Sir Lord Zameer Choudrey and his family, were at the forefront of fundraising efforts in the UK following the devastating floods in Pakistan a few months ago.

Their Bestway Group, which is Pakistan’s leading foreign investor, announced financial and material support of $1 million (£846 million) for those affected by Pakistan’s floods in September.

Bestway Wholesale’s managing director, Dawood Pervez, said, “As a company which has retained its heritage and links to Pakistan to this day, we want to do all we can to support the recovery efforts and help those that need it the most.

“The significant investment already made by the Bestway Group allows us to actively provide immediate relief; and by working in partnership with local businesses and financial institutions, we are putting in place long-term sustainable
measures so we can rehabilitate the masses affected by this national tragedy.”

Lord Choudrey organised a fundraising dinner at a London hotel on September 23, with leading British politicians attending the event.

“The Bestway Group has raised funds to the tune of $2.3m [£1.94m], which will be deployed urgently on the ground in Pakistan to help the victims of those impacted by the recent flooding,” the company said. “The monies raised have been pledged to build homes (or shelters) for 5,000 families, provide usable water for more than 100,000 individuals and provide food and medical supplies to over 20,000 people.

Brothers Vijay and Bhikhu Patel, who made their wealth in pharmacy, have expanded into China. They have partnered with a charity in Zanzibar which aims to train health workers and provide state-of-the-art equipment for two district hospitals and their outreach centres.

Sierra Leone is another country where the brothers, with their Shanta Foundation (named after their mother) want to make a difference.

In India, they are working in Gujarat (where the family hail from) as well as Bihar in the east, to help underprivileged people access basic healthcare and education.

Lord Verjee is another entrepreneur whose primary focus is pursuing a number of charitable causes through his Rumi Foundation.