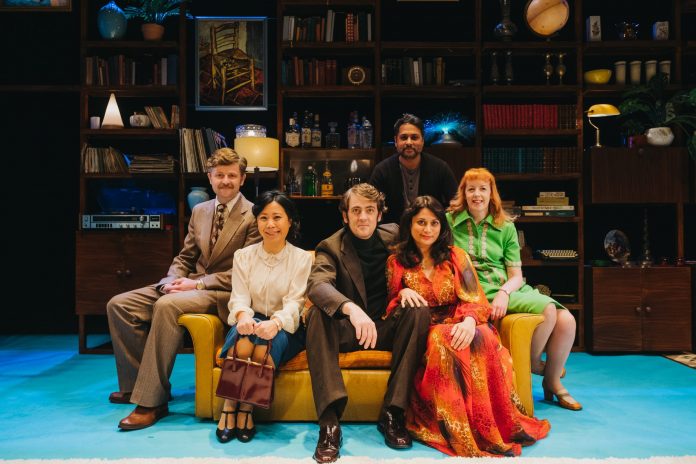 He has added to his long list of stage accomplishments that have included founding a successful theatre company, hit plays, launching new talent, and getting an MBE earlier this year. This 1970s-set play with contemporary themes is interesting new territory for a great British Asian theatre maestro, who has been entertaining audiences for over 20 years.

Eastern Eye caught up with him to discuss his theatre journey, Abigail’s Party, and forthcoming feature film directorial debut.

How do you reflect on your journey in theatre?
It has been an amazing ride so far. When I started out in theatre I looked around and didn’t see many people that looked like me, either making the work or in the audience, and I wanted to tell our authentic stories. Now the south Asian community has a rich presence in the UK theatre scene; so much has changed. I have been incredibly blessed to work with a wonderful group of people and make work that brings a bit of joy into people’s lives. My journey continues and there’s lots of exciting new work in the pipeline.

What connected you to Abigail’s Party?
It has always spoken to me. The writer, Mike Leigh, is one of my heroes and has inspired my work. His plays and films are so authentic and honest, you feel like you are inside the room. The thing that really captivates me is how it talks about aspiration, class, and race. My parents were immigrants and always strived to do better and that has become a part of our DNA as British south Asians. The genius comedy explores this and is excruciatingly honest about marriages.

What can we expect from the production?
A lot of fun! It is a genuinely funny play, which hasn’t lost any of its bite and wit. Bringing in a diverse cast adds a new layer, and it has been really interesting to see the way the comments on race and class change when you are talking to a British south Asian Beverley (played by the limitless Goldy Notay).

Did the fact this is an established play make you change your creative approach?
When I took on the piece, I had a lot of zany ideas and felt like I needed to do something big to reinterpret it – but the beauty of the play is that the text is so economical, and the characters are so brilliantly drawn. As I progressed, I felt less and less need to make a statement and just let the excellent actors and script do its job. Sometimes less is more.

Why do you think the themes of this play are still so relevant?
This play has stood the test of time and I think it’s because of the themes. Class and race are even more relevant in our lives today and being set in 1977 makes you realise that we haven’t changed that much at all.

What is your favourite moment in the play?
I have too many favourite moments! The cast are so talented, and they have worked so hard to bring his beautiful work to life. I especially love the moments when Lawrence (Orlando Wells) and Beverly (Goldy Notay) fight like children; its endearing and very funny!

What makes for great theatre?
Theatre is about the audience as much as the artist. Great theatre makes people think, challenges their preconceptions, but also sends them home thinking they had a fun night out.

How do you feel as a director after your vision is brought to life on stage?
It is not really my vision; theatre is such a collaborative medium. Mostly, when something completes its journey to the stage, I am proud of all the people who worked with me to get it there. Then there is often a little moment of sadness as you say goodbye to a production and move onto the new project; it is a bit like your child going to university.

What was the experience of directing your forthcoming film after having directed so much great theatre?
It was very different. I know how theatre is made inside out because I have been doing it for so long. With the film, even though I have some experience, there was a lot of excitement of learning new things and being surrounded by a whole new way of working.

Tell us about the film?
The film Little English is based on my play There’s Something About Simmy. How often do we get to make a British south Asian rom-com? In my opinion, because the commissioners of film and TV are white men or women, we are often renegaded to be in issue based ‘worthy’ dramas made for white audiences. This film is for everyone and especially us.

What inspires you today?
I look around and I see so much vibrance, so many new artists coming through. Getting to collaborate with new people is extremely enticing to me.

Why should we watch Abigail’s Party?
It’s funny, it’s sharp and it reminds us how awful we really are! But in a good way, there is a lot of heart in it too.