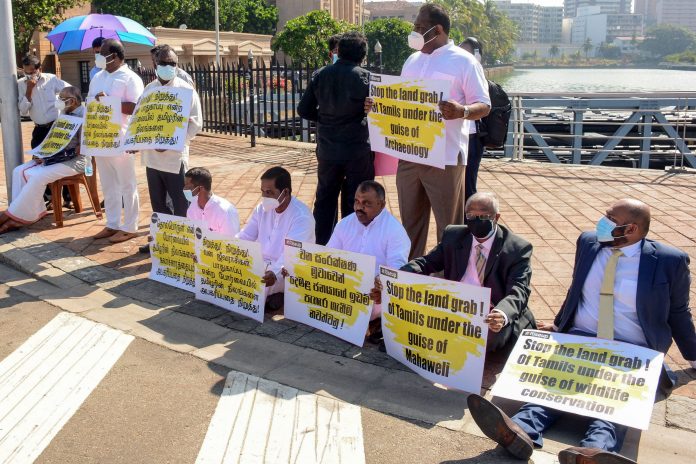 Tamil legislators attempted to storm the Sri Lankan president’s office Thursday to protest against what they call a government land grab in areas traditionally dominated by the ethnic minority.

Critics accuse the government — representing the Sinhalese majority — of breaking promises made at the end of a bloody 37-year civil war in 2009 to end the marginalisation of the Tamils.

A task force appointed in mid-2020 by President Gotabaya Rajapaksa began identifying areas in the Tamils’ heartland in Eastern Province that the government would acquire.

The Tamils reject government claims that the aim is to protect archeological sites, seeing it instead as a way to dispossess Tamils of land they have owned — but often without documents to prove it — for generations.

“Thousands of acres have already been taken over by the government in the past year,” Tamil legislator M. A. Sumanthiran told AFP.

“Declaring areas as being archaeologically important is the ruse to take over lands traditionally farmed by Tamils in the area.”

He was one of 12 Tamil opposition legislators in the Sri Lankan parliament who took part in the demonstration.

The president’s office dismissed the protest as a gimmick ahead of next month’s UN Human Rights Council sessions in Geneva where Sri Lanka’s rights record is to be discussed.

His government is also facing censure over its failure to deliver on promises to ensure accountability for war-time atrocities committed by both sides.

More than 100,000 people are estimated to have been killed in the decades-long Tamil separatist war.

International rights groups and UN estimates place the number of Tamil civilians killed by government forces in the final months of war at about 40,000, a figure disputed by Colombo.

Successive governments have resisted international calls for an independent investigation.