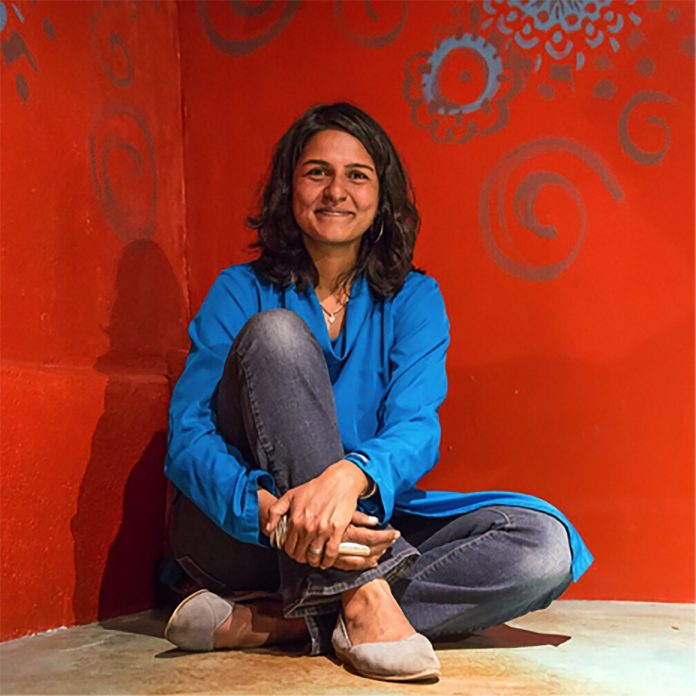 IT WAS perhaps always going to be inevitable that Nandita Dinesh would write her newly published debut novel This Place/That Place.

Hailing from Coimbatore in Tamil Nadu and now living in San Francisco, she spent years working on community theatre projects in current and recovering conflict zones like Kashmir, Uganda, and Mexico, along with writing various books about it. She used these multitude of experiences like censorship, police surveillance, and quasi-house arrest as inspirations for her new book, revolving around two protagonists pitted on opposite sides of a war brought together under unexpected circumstances.

The neatly crafted novel that is political, personal, and filled with emotion is the start of a new journey for the seasoned global traveller.

Eastern Eye caught up with the writer to discuss her work in conflict zones, new novel, and future hopes.

What made you want to work in community theatre projects in conflict zones?
It began as a desire to connect the two areas I was studying in university, theatre and economics. After my first visit to a war zone, it became a fascination and obsession with what was/is a seemingly impossible contrast – that even in the darkest of times and most desperate circumstances, there is room for creativity. For art. For theatre.

Tell us about some of the work you did in these places?
In each place, the work has been different. I daresay that’s the essence of devised theatre – a participatory process of making in which an ensemble of creators build a piece from scratch. In this approach, the work needs to shapeshift all the time, to what a particular group of people might want to create.

How did your role differ in some of these places?
In northern Uganda, I primarily engaged as a researcher. In Rwanda, as a curriculum designer for an NGO’s theatre programme. In Kashmir, as a PhD student, who became the co-creator of a 24-hour long immersive theatrical creation.

What led you towards writing your debut novel?
I started my journey as a writer with academic writing but, slowly, began to find myself getting frustrated with the language of academia. Don’t get me wrong, there are many academics who write in wonderful ways – it just felt too limiting for me. This limitation, in addition to the hypervigilance that one has to carry these days when writing about ‘real world’ war zones. Fiction felt like it could be more freeing.

Tell us about the story?
Well, it’s a simple premise, really. Two passionate and intelligent people are stuck together during a curfew and this forced intimacy creates the conditions for a range of revelations; personal, political, and everything in between.

Was there anything specific that inspired the story?
It’s a composite of various realities of war that I have witnessed. Realities that my friends and colleagues speak about, which I can never understand fully, but use my imagination to try to explore just a little bit more. It’s inspired by experiencing curfew in Kashmir, by work I saw being done in rehabilitation centres with former child soldiers in northern Uganda, by tough questions about intergenerational trauma I witnessed in Rwanda.

What inspired the interesting title This Place/That Place?
The desire for it to not become about one place or one conflict, but instead, speak to larger conditions. Of binaries. Of borders. Of occupations.

Who are you hoping connects with this book?
Everyone! As I mentioned before, an aspect I found limiting about academic writing is its tendency to be targeted towards a very specific audience familiar with how that language functions. So, with a novel, I’m really hoping to speak to a wider audience. (Laughs) To be perfectly honest, after the kind of limited readership I’ve had with my academic writing, I’ll take an audience anywhere in the high double digits as a win!

What is your favourite part of the book?
It depends on the day you ask me. Some days it’s the sexual tension between the two protagonists. Other days it’s the interspersed texts that are akin to manifestos. Today, I think it’s the letter that ends the book, for all the questions that it leaves the reader with.

Is there a key message you want to convey?
No message. I want each reader to find their own message.

Did you learn anything new while writing this book?
What has been immensely educational is the process of developing this work with my agent, the absolutely fantastic Mary Krienke of Sterling Lord Literistic. Mary’s feedback and input have been pivotal in my considerations of how much I want to push the envelope. Every author should be fortunate enough to have someone like Mary as part of their process.

What do you enjoy reading?
Ever since I started writing more seriously, sometime in 2015, I think, I began reading less. I used to be a voracious reader but not anymore. I find that when I read, I start writing like the person whose voice I’m immersed in. Not reading has been essential in helping me think about how I want to write.

What can we expect next from you?
I have a few projects I’m working on; what the world will see next depends on the whims of the publishing world! What I can say is each of the three ongoing manuscripts, at different stages of development, is doing its own thing. One is classifiable as a novel; the other is somewhere between a play, a novel, and a memoir; the third is some kind of illustrated novel.

What is it that inspires you as a writer?
The news. It’s always something that’s in the news.

Why should we pick up your new book?
You should pick it up because it’s adventurous. And the world needs more adventures, no?