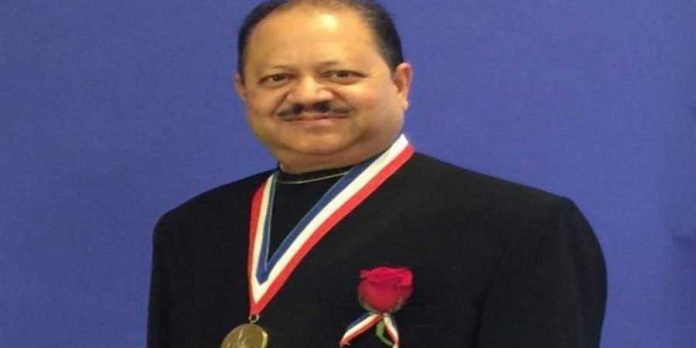 Eminent Indian-American physician and community leader Ajay Lodha has passed away due to complications from COVID-19.

Lodha, former president of American Association of Physicians of Indian Origin (AAPI), battled COVID for the last eight months at Cleveland Clinic and breathed his last on November 21. He was 58.

He is survived by his wife Smita, son Amit and daughter Shweta.

The Consulate General of India in New York tweeted: “deeply saddened to learn of the demise of Dr. Ajay lodha, a prominent member of the Indian-American community. He will be in our hearts always. His humility, kindness and contribution to the society shall continue to inspire us.”

AAPI President Sudhakar Jonnalagadda expressed shock and sadness at the passing of the “visionary leader” and said his death is “the darkest day in AAPI history.”

President-Elect of AAPI Dr Anupama Gotimukula said Lodha’s heroic fight with Covid 19 “epitomizes the struggles of frontline health workers.” Lodha along with other physicians of Indian origin who have lost their lives due to the pandemic “will continue to inspire us and AAPI forever.”

Prominent members of the Indian-American community also mourned the passing of Lodha, who was honoured with the prestigious Ellis Island Medal of Honour in 2016 and had served as the President of AAPI in 2015-16.

In 2008, Lodha was honoured with the Nargis Dutt Memorial Foundation Physician of the Year Award.

Jaipur Foot USA Chairman Prem Bhandari expressed condolences on the passing of Lodha, who he described as a “dear friend” and a “great human being” who used to go out of his way to help those in need.

Condolence messages also came from Former Chief Minister of Rajasthan Vasundhara Raje who recalled Lodha’s immense contribution to the diaspora, especially the Rajasthani community, in the US.

Former Director General, Border Security Force, K K Sharma said Lodha “was not only a proficient doctor but also an important functionary of Rajasthan Association of North America. He was always ready to help others and will be fondly remembered.”

Describing him as “a dear friend and courageous soul”, Vice President of AAPI Dr. Ravi Kolli said Lodha was a “man of passion, integrity, determination and generosity. He fought till end with great valour befitting of a warrior. His commitment to AAPI family was unprecedented.”

Lodha was the former president of Rajasthan Association of North America and Rajasthan Medical Alumni Association and Director of Research Department at Flushing Hospital, New York.

An internist by profession, Lodha had completed his residency at the Flushing Hospital and was the founder and president of Queens Medical Services, a primary care practice.