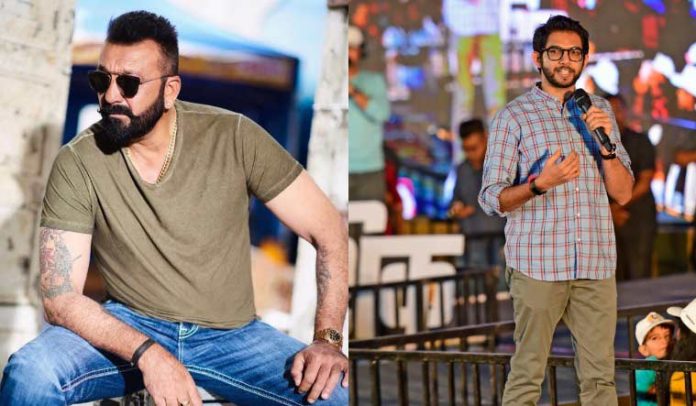 Actor Sanjay Dutt has backed Aaditya Thackeray, who is making his debut in electoral politics, and said he hopes the Yuva Sena leader wins by a huge margin as the country needs dynamic young leaders. The 29-year-old Yuva Sena chief, who is the elder son of Shiv Sena president Uddhav Thackeray, is contesting the October 21 Maharashtra Assembly polls from Mumbai’s Worli constituency. He is the first member of the Thackeray clan to contest an election.In a video posted on Twitter, Dutt said Aaditya Thackeray is like “a younger brother to me”.

“He comes from a fantastic lineage of Balasheb Thackerayji, who supported me and my family immensely and was like a father figure to me. I can never forget that. Uddhav bhai is the same,” the 60-year-old actor said. “I wish Aaditya all the very best. I hope he wins with a huge mandate because we need dynamic young leaders in our country. Jai Hind, Jai Maharashtra,” Dutt added.

Ever since the Shiv Sena was founded by late Bal Thackeray in 1966, no member of the family ever contested any election or held any constitutional post.Uddhav Thackeray’s cousin and Maharashtra Navnirman Sena (MNS) chief Raj Thackeray had earlier announced his intention to contest the 2014 state Assembly polls, but later changed his mind. Notably, Sena founder Bal Thackeray had supported Dutt when he was booked and arrested in connection with the 1993 Mumbai serial blasts case.