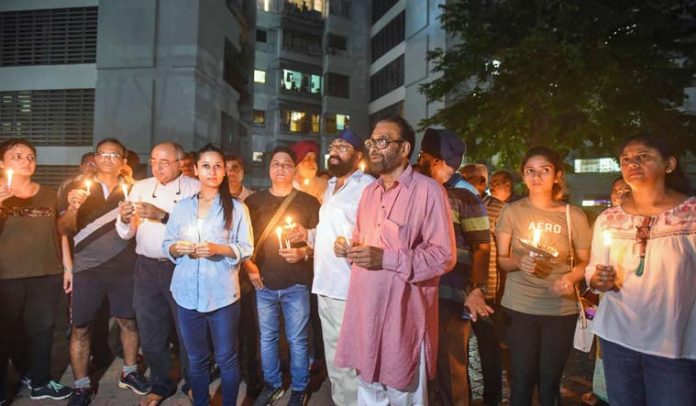 A depositor of scam-hit PMC Bank allegedly committed suicide here, while another died of a heart attack a few hours after taking part in a protest by bank customers seeking their money back.

Dr Nivedita Bijlani (39), who allegedly ended life on Monday evening, and Sanjay Gulati (51) who died of a heart attack on the same day, had deposits of over Rs 90 lakh each with the Punjab & Maharashtra Cooperative Bank.

The bank has been put under restrictions by the RBI following the discovery of a Rs 4,355 crore scam. Deposit withdrawals have been capped at Rs 40,000 over a six-month period, causing panic and distress among depositors.

Bijlani, a post-graduate in medicine, allegedly ended her life by taking overdose of sleeping pills at her residence in suburban Versova late Monday evening, police said, adding that she had deposits of over Rs 1 crore with the bank.

However, the police also said that Bijlani, who had remarried recently, suffered from chronic depression, and had also tried to end her life earlier when she was in the US.

No suicide note has been found, and further investigations are on, officials said.

Sanjay Gulati had lost his job with Jet Airways after the airline was grounded in April following bankruptcy.

He has a specially-abled son whose treatment requires over Rs 25,000 a month, and they were struggling to pay his tuition fees, family members said.

Accompanied by his 80-year-old father, Sanjay participated in the depositors’ protest in south Mumbai on Monday morning. Later, while having a late lunch at his house in suburban Oshiwara, he collapsed, his family said.

He was rushed to a nearby hospital which declared him dead. “He had lost his job and was extremely stressed for the last few days after the bank crisis. He feared we will not get any of our money back,” wife Bindu Gulati told reporters.

Sanjay’s father said they had a deposit of over Rs 90 lakh with the bank.

“Many retired people have their accounts there, many are struggling. How do you run the house? People have deposits ranging from Rs 10 lakh to Rs 2 crore stuck at PMC Bank. One of my friends was to undergo operation,” a senior citizen participating in a candlelight march outside Gulati’s home said on Tuesday evening.

On Monday evening — the same day Gulati and Bijlani died — the withdrawal cap was hiked from Rs 1,000 to Rs 40,000, with the RBI saying it will give relief to 77 per cent of depositors.

Real estate firm HDIL allegedly accounted for 70 per cent of the bank’s Rs 9,000 crore advances. According to the Mumbai Police’s Economic Offences Wing, HDIL’s loans turned Non-Performing Assets, but the bank management hid this from the RBI’s scrutiny.

Meanwhile, ruling Shiv Sena’s Members of Parliament Rahul Shewale, Gajanan Kirtikar, Arvind Sawant and Anil Desai called on RBI Governor Shaktikanta Das, and requested the RBI to merge PMC Bank with a state-run lender like Bank of Baroda or Punjab National Bank, or with a private sector one like ICICI Bank or HDFC Bank.