Home Food News ‘The critics need to keep an open mind about the policy’: Boris... 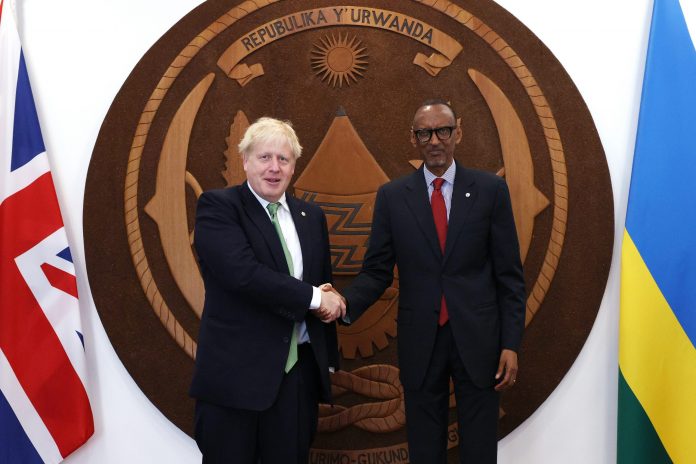 On the first day of a trip to Kigali — which is hosting a Commonwealth summit this week — he also heaped praise on Rwandan President Paul Kagame and the achievements of his tiny African country, despite widespread concerns about its human rights record.

The London-Kigali scheme, which involves Britain deporting asylum seekers thousands of miles away to Rwanda, has provoked a storm of outrage.

But Johnson told reporters: “The critics need to keep an open mind about the policy.”

“What the critics of the policy need to understand, and I have seen loads and loads of criticism, is that Rwanda has undergone an absolute transformation in the last couple of decades,” said the British leader.

He held talks with Kagame about the deal and other issues, including the war in Ukraine, his office said.

Rights groups, church leaders and the United Nations have strongly denounced the migrant arrangement, which has threatened to overshadow this week’s Commonwealth Heads of Government Meeting (CHOGM).

One of the harshest opponents is reportedly the British heir to the throne Prince Charles, who has been quoted by the British media as saying it was “appalling”.

Johnson said he would speak about the merits of the deal when he meets Charles, who is also in Rwanda as Queen Elizabeth II’s representative at the Commonwealth summit, on Friday.

The British leader said it was vital to resolve the problem of “illegal cross-Channel trafficking of people whose lives are being put at risk by the gangs”.

A first flight of a small group of asylum seekers had been due to take off from the UK last week but it was halted following a last-minute injunction by the European Court of Human Rights in Strasbourg.

And Britain — which left the EU last year — said Wednesday it will introduce legislation allowing it to ignore decisions by the ECHR, which is not part of the bloc.

Johnson accused critics of the deportation policy of basing their concerns on “a perception, perhaps a stereotype, of Rwanda that is now outdated”.

The country of almost 13 million people has been indelibly marked by the 1994 genocide but now lays claim to being one of the most politically stable and economically developed countries in the region.

But in an open letter to Commonwealth leaders ahead of the summit, 23 rights groups and civil society organisations said there was a “climate of fear” in Rwanda.

“Commentators, journalists, opposition activists, and others speaking out on current affairs and criticising public policies continue to face abusive prosecutions, enforced disappearances or have at times died under suspicious circumstances,” the letter said.

It accused the 54-nation Commonwealth — made up of mainly former British colonies — of turning a blind eye to Rwanda’s rights record, saying it risked its credibility and integrity by holding the summit in Kigali.

The two-day summit opening Friday is expected to see a tussle for the leadership of the body, which represents some 2.5 billion people or a quarter of humanity, and renewed talk about its future role and relevance.

Johnson told a business forum that Britain aimed to forge trade deals across the Commonwealth where, he said, total GDP is forecast to rise by nearly 50 per cent to $19.5 trillion over the next five years.

He also announced that Britain will on July 6 launch a new preferential trade system for 65 developing countries, including Rwanda and 17 other Commonwealth members, that would get rid of “pointless tariffs”.

Meanwhile, Johnson welcomed Rwanda’s “moral stance” on the war in Ukraine, his Downing Street office said in a statement after his meeting with Kagame.

The two men discussed ways to address the fallout from Russia’s invasion, including the sharp rise in food prices which has hit African countries hard.