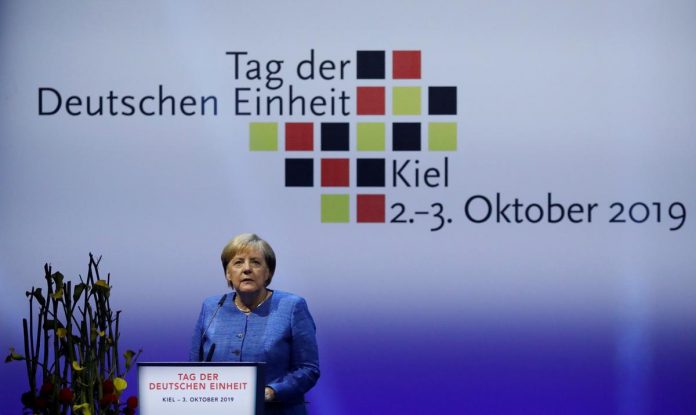 Chancellor Angela Merkel made a veiled attack on the far-right Alternative for Germany (AfD) party on the 29th anniversary of German reunification on Thursday, saying economic grievances in the east were no excuse for racism.

In a speech marking the anniversary, Merkel cited a government-commissioned report that found economic discrepancies between the eastern and western parts of Germany and which said people in the east feel like second-class citizens.

But she said this was no justification for verbal attacks on foreigners under the guise of free speech, and that such attacks threatened democracy in Germany. Shortly after she spoke, about 600 people took part in a far-right rally in Berlin, with some carrying German flags and waving anti-Islam placards.

Merkel did not mention the anti-migrant AfD by name but it has stronger support in eastern parts of Germany and made big gains in elections in two eastern regions last month.

“It should never be the case that disappointment with politics, however significant, be accepted as a legitimate reason to marginalise, threaten or attack others because of their skin colour, religion, sex, or sexual orientation,” Merkel said in the northern city of Kiel.

“The values of our constitution must guide each and every debate in our country,” she said. “In concrete terms this means, ‘Yes’ to open debate, ‘Yes’ to tough demands from politics, ‘No’ to intolerance, ‘No’ to marginalisation, ‘No’ to hate and anti-Semitism, ‘No’ to living at the expense of the weak and minorities.”

Merkel’s conservatives and their Social Democrat (SPD) coalition partners have accused the AfD, the largest opposition party in parliament, of legitimising a language of hate that spurs violence.

They have said the AfD manipulates the grievances of eastern Germans – about lower wages and pensions, an exodus of young people, plans to phase out coal and the challenge of integrating a record influx of refugees – to make political gains through populism.

The AfD, which entered parliament two years ago in elections that were shaped by disquiet over Merkel’s decision in 2015 to welcome almost 1 million migrants, says it has always distanced itself from violent, far-right extremists.

The deadly shooting of a pro-immigration conservative politician in June and a rise in anti-Semitism have fuelled debate about the anti-immigrant speeches of some AfD leaders.

The party has about 10% support in western regions and is polling at around 14% nationally.

The report cited by Merkel showed east Germany’s economic strength has risen to 75% of the west German level from 43% in 1990. Employment is at a high in the east and wages there are 84% of those in the west, it showed.

The report found that less than 40% say reunification was worth it and less than half are happy with democracy in Germany.

“A lot has been achieved in the past 29 years. In the west as well as in the east, people are all in all happier with their lives than at any other moment since reunification. But we also know that this is not the whole truth,” Merkel said.

“We must all learn to understand why reunification for many people in eastern states is not only a positive experience.”