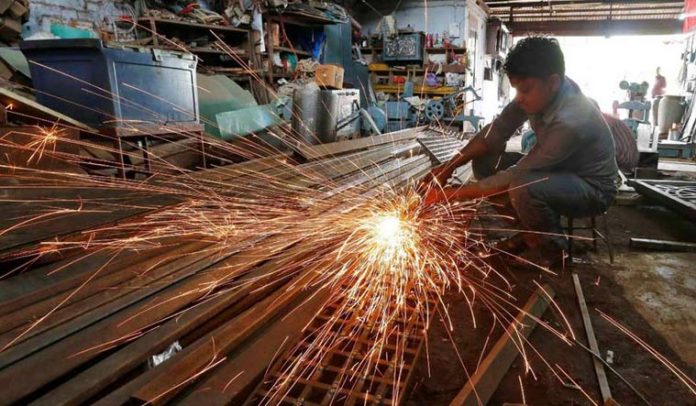 Days after India’s GDP growth hit a six-year low of 5 per cent in the first quarter of the current financial year, the expansion in the country’s manufacturing sector has hit its slowest in 15 months in August, according to a latest survey by the Nikkei Manufacturing Purchasing Managers’ Index (PMI). The new low in manufacturing comes after demand and output grew at their weakest pace in a year and cost pressures increased.

The Nikkei PMI declined to 51.4 in August from July’s 52.5, its weakest since May 2018. However, it has remained above the 50-mark separating growth from contraction for more than two years. This is the 25th consecutive month that the manufacturing PMI has remained above the 50-point mark. In PMI parlance, a print above 50 means expansion, while a score below that denotes contraction.

“August saw an undesirable combination of slowing economic growth and greater cost inflationary pressures in the Indian manufacturing industry,” said Pollyanna De Lima, principal economist at IHS Markit—the agency that conducts the survey, in an official statement. A sub-index tracking overall the demand hit its weakest in more than a year and foreign orders increased at their slowest pace in 16 months. Input costs rose at their quickest pace in nine months while the rate of increase in output prices was slower than in July, suggesting firms’ profit margins were squeezed.

“Another worrying sign was the first drop in input buying for 15 months, which reflected a mixture of intentional reductions in stocks and shortages of available finance,” De Lima said. “Until manufacturers are willing to loosen the purse strings, it’s difficult to foresee a meaningful rebound in production growth on the horizon.”The plunge in PMI number has been signalled by the slump faced in the automobile sector. On Sunday, reports suggested that Tata, Honda, Toyota and Mahindra sales figures plummeted in August, continuing similar trends from July.

Tata Motors reported a 58 per cent dip in passenger vehicle sales in August, while Honda reported a 51.28 per cent decline in domestic sales. Total sales of Maruti Suzuki reported a 32.7 per cent drop, while that of Toyota Kirloskar Motor was at 21 per cent. The figures paint a glommy picture of the Indian economy and would threaten to increase unemployment fuigures as companies might resort to job cuts to tackle losses.

Going ahead, goods producers maintained optimistic growth projections, with hopes of a pick-up in demand and marketing efforts predicted to support output in the year ahead. Sentiment strengthened to a 16-month high. On the prices front, the measure of input costs accelerated to a nine-month high. “Another factor restricting quantities of purchases was a pick-up in the rate of increase in input prices. While not alarming, the acceleration in cost inflation may restrict central bank stimulus to the economy in the near-term,” Lima said.