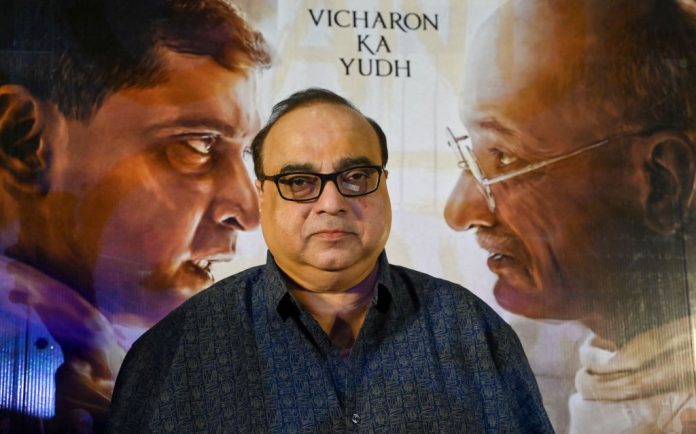 Ahead of the release of ‘Gandhi Godse -Ek Yudh’, filmmaker Rajkumar Santoshi on Monday wrote to the Special Commissioner of Police, Mumbai, requesting additional security for him and his family, claimed that he has been receiving repeated threats.

Director Santoshi announced that he had sought protection in the light of threats at a press conference on Monday.

The letter read, “I, Rajkumar Santoshi, a well-known director of films in the Indian Film industry, am hereby writing this letter to inform you about the interruptions in a press conference during a Horticular press conference held by our team on 20 January 2023 for the release of the film ‘Gandhi vs Godse’. My team (director, producer & cast for the movie ‘Gandhi vi Godse’ was in the middle of the press conference when it was interrupted by a group of people with vested interests. They barged into the press conference which was held at 4 PM at PVR Citi Mall, Andheri. Later, several threats were received from some unknown people asking me to stop the release and promotion for this movie. I feel unsafe and I further submit that grave damage and injury could be caused to me and my family members if such persons are set free and if no steps are taken by your ad-self and further losses would be caused not only to us but the public at large. I Hereby humbly request you to take all necessary steps under law in this matter and further request you to urgently provide me with additional security to protect myself and other members of my family.”

Set in post-independence India of 1947-48, ‘Gandhi Godse-Ek Yudh’ depicts the war of ideologies between Nathuram Godse and Mahatma Gandhi. The trailer showcased a powerful glimpse into the tumultuous period following India’s partition.

Following the trailer release of the period drama film on January 11, Congress sought a ban on the film in Madhya Pradesh.

On the criticism he has been receiving for the film, Santoshi earlier said to ANI, “It has come to my notice that some people, claiming to be followers of Gandhiji, burnt my effigies and it might happen in future as well. This surprises me because people who truly believe in him will never resort to violence. They will never come out on the streets with lathis and burn effigies. It only goes to show that they actually don’t believe in Gandhian principles. They haven’t even seen the film and are reacting to the trailer. It shows that their motive is something else.”

He added, “I request people to watch the film with an open mind and not come to theatres with any preconceived notions. Those coming with an open mind will truly enjoy the film. There’s not been a single complaint against the film’s previews, not even from the censor board.”

Meanwhile, Mahatma Gandhi’s great-grandson, Tushar Gandhi, waded into the controversy around the film, saying, “I’m not surprised because for them (the makers of the film), Godse is a hero, and if they portray him as a hero, it should not surprise any of us. But I cannot comment on the merits or the demerits of the film because I haven’t seen it and I don’t intend to see films that glorify murderers.”