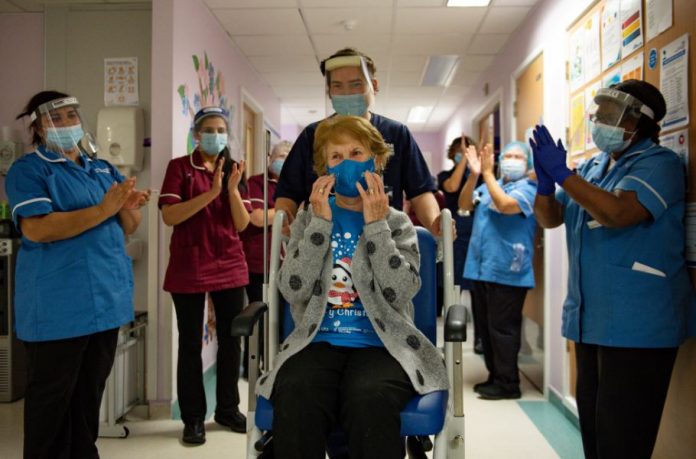 A 90-year-old British grandmother became the first person in the world to receive the Pfizer Covid-19 jab following its clinical approval.

Margaret Keenan, who turns 91 next week, said it was “the best early birthday present” and added: “My advice to anyone offered the vaccine is to take it. If I can have it at 90 then you can have it too.”

Keenan was given the life-saving jab by nurse May Parsons at her local hospital in Coventry, a statement from NHS said.

Originally from Enniskillen, Northern Ireland, she has lived in Coventry for over sixty years. She will receive a booster jab in 21 days to ensure she has the best chance of being protected against the virus.

Keenan said: “I feel so privileged to be the first person vaccinated against Covid-19. I can finally look forward to spending time with my family and friends in the New Year after being on my own for most of the year. I can’t thank the NHS staff enough who have looked after me tremendously.”

She has a daughter, a son and four grandchildren and is looking forward to being able to go out again once she receives the top up dose.

NHS England chief executive Sir Simon Stevens said: “Today is just the first step in the largest vaccination programme this country has ever seen. It will take some months to complete the work as more vaccine supplies become available and until then we must not drop our guard.

“A heartfelt thank you goes to everyone who has made this a reality – the scientists and doctors who worked tirelessly, and the volunteers who selflessly took part in the trials. My colleagues across the health service are rightly proud of this historic moment as we lead in deploying the PfizerBioNTech vaccine.”

Britain last week became the first country to approve the Pfizer-BioNTech vaccine, raising hopes of a breakthrough in the pandemic, which has killed more than 1.5 million worldwide.

“It’s a huge honour to be the first person in the country to deliver a Covid-19 jab to a patient, I’m just glad that I’m able to play a part in this historic day,” said nurse May Parsons.

“The last few months have been tough for all of us working in the NHS, but now it feels like there is light at the end of the tunnel.”

Britain has been one of the worst-affected countries in the world, with more than 61,000 deaths in the outbreak from 1.6 million cases.

Up to four million doses are expected by the end of December.