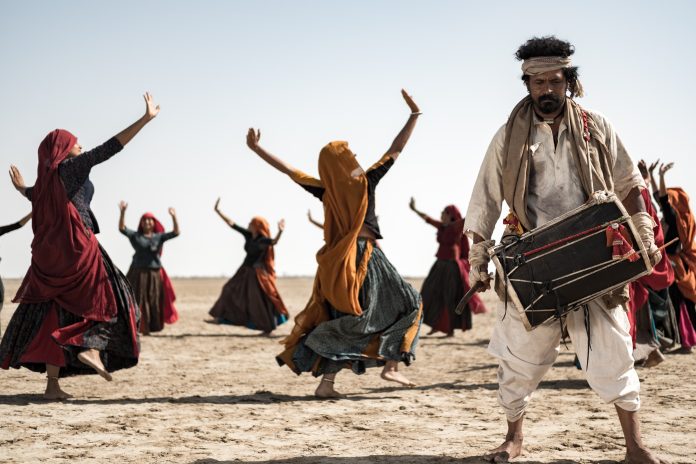 Gujarati film “Hellaro”, announced as the Best Feature Film at the 66th National Film Awards this year and the film trailer launch event was held on 10th October at Ahmedabad. Hellaro, a Gujarati feature film produced by Saarthi Productions in association with Harfanmaula Films (Ahmedabad) was declared as the Best Feature Film at the National Film Awards which was conferred by the Government of India. in addition, 13 actress who have acted in the film have received Special Jury Mention best actress at National Film Awards. This is the first Gujarati film to win both these awards. The IFFI jury has selected “Hellaro” as the opening film at the 50th International Film Festival of India to be held in Goa this November, 2019. The film is releasing in cinema on 8th November, 2019.
Based on Gujarat’s folk dance form, Garba, Hellaro focuses on self-expression of women with more than 13 actresses in the story. The set of “Hellaro” was created in the middle of the vast desert in Kuran village which is the last village of Gujarat at the Gujarat-Pakistan Border. More than 300 costumes were prepared to give the traditional feel of life at Kutch and the shoot of the film lasted for 35 days in the scorching summer heat of Kutch’s desert.
Hellaro is directed by Abhishek Shah who has been working in Gujarati theatre since the past 17 years as a writer, director and actor and has received numerous awards for his plays. He has also worked as a casting director for 12 films. he shared his view on his film winning National Awards, “When I was thinking about the story of the film, Sharad Poonam was going on and the background of the story was our folk dance Garba and therefore the idea of ​​making this film turned out to be a reality,”. Soumya Joshi who is a well-known poet-writer-playwright and author of the Hindi film “102 Not Out” and is also famous in the Gujarati theatre and poetry world, is the lyricist and dialogue writer of the film. The music of the film is composed by Mehul Surti.