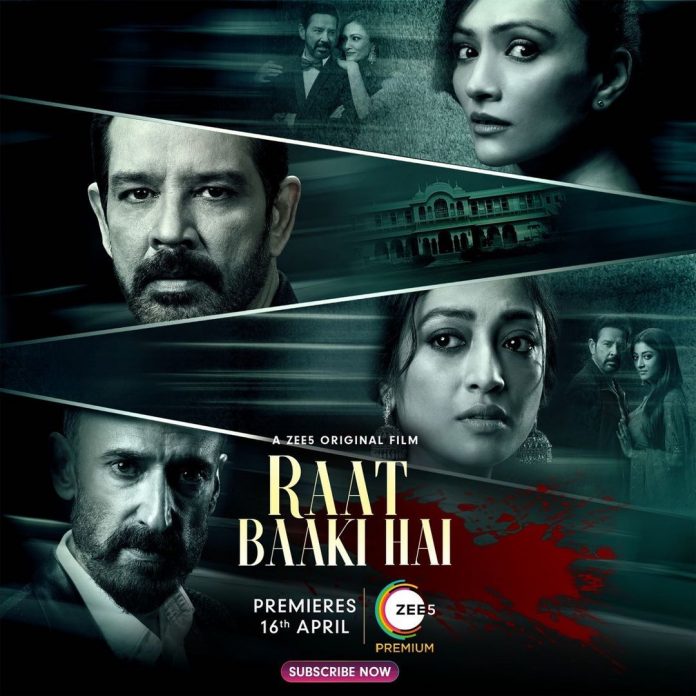 ZEE5, which has multiple movies and streaming shows in its content catalogue, has just unveiled the trailer of their next original, titled Raat Baaki Hai. Directed by Avinash Das, the murder mystery boasts of an ensemble cast which includes the likes of Annup Sonii, Paoli Dam, Rahul Dev, Dipannita Sharma and Saurabh Sachdeva.

The trailer of the nail-biting murder mystery introduces all central characters of the film – Kartik, Vasuki, Vaani, and investigator Ahalawat to the audience. One of the main characters has been murdered and Kartik, played by talented actor Annup Sonii, is on the top of Ahalawat’s suspect list. However, as the case proceeds further, Ahalawat realizes that apart from the murder, there is a bigger picture that lays ahead. This change of narrative will eventually intrigue the viewers.

Director Avinash Das has weaved the story of Raat Baaki Hai around the themes of love, deceit, and revenge. The plotline of the film revolves around one night where two estranged lovers end up meeting each other after a long gap of 12 years under strange circumstances. One is on a run for being a murder suspect and as the story unfolds, the unexpected twists and turns will stun the audience.

The film, set in Rajasthan, is an adaptation of a popular play Ballygunge-1990, written by Atul Satya Koushik. Produced by Samar Khan of Juggernaut Productions and co-produced by Pictionary Playyerss, Raat Baaki Hai is set to premiere on 16th April, on ZEE5.