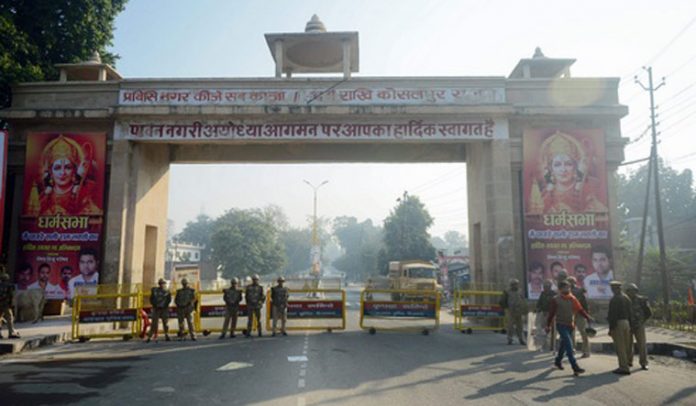 A delegation of the Vishwa Hindu Parishad on Monday met Faizabad Divisional Commissioner (DC) Manoj Moshra and demanded that they be allowed to light lamps and do ‘puja’ at the disputed site in Ayodhya on Diwali, on October 27. Their demand was, however, turned down by the DC.

The delegation, which included VHP leaders and seers, argued that it would hurt the religious sentiments of Hindus if they could not light the lamp at Ayodhya on Diwali. The festival is celebrated to mark the return of Ram to Ayodhya after defeating and killing Ravana in Lanka.

The VHP’s demand comes even as prohibitory orders under section 144 have been clamped in Ayodhya as the Supreme Court’s revised deadline for wrapping up the proceedings in the sensitive Ram Janmbhoomi-Babri Masjid land dispute case approaches. The prohibitory orders will continue till December 10.

Section 144 prohibits assembly of four or more people and empowers the police to book people for rioting.

The protracted hearing in the politically sensitive case entered the crucial final leg on Monday when the top court resumed proceedings on the 38th day after the week-long Dussehra break.

A five-judge Constitution bench headed by Chief Justice of India Ranjan Gogoi, which started the day-to-day proceedings on August 6 after mediation proceedings failed to find an amicable solution to the vexatious dispute, has revised the deadline for wrapping up the proceedings and has fixed it on October 17.