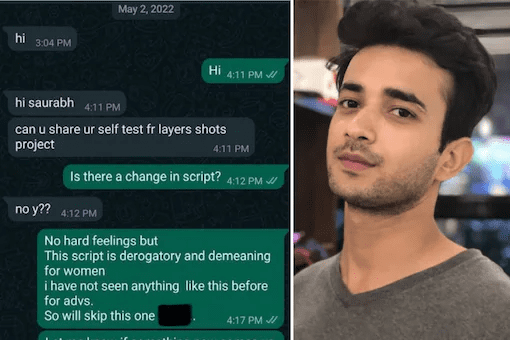 An actor had refused to appear in the controversial Layer’r SHOT perfume ads that recently faced massive backlash for their content. The advertisements featured four men discussing who gets the “shot” on the last remaining bottle of perfume but showing a woman instead of the bottle.

The other showed some men walking in on a man and a woman in a bedroom and talking about getting a shot, but it’s really about the body spray. The brand later apologised and stopped the telecast with immediate effect.

When actor Saurabh Verma was approached for the commercial, he had proposed a change in script but when his request was denied, he politely turned down the offer.

Digital marketing agency Kinnect’s Senior Creative Director, Abbas Mirza, has shared a screenshot of Saurabh’s chat with the casting agent for the ad.

In a long post, Mirza praised his actor-friend Saurabh Verma, who turned down a ‘problematic’ commercial.

“One of my actor friends said ‘NO’ to LAYER’R SHOT ad when he was approached for it. I think his story needs to be told! I had gone to Lokhandwala for some work when I bumped into Saurabh Verma, a close actor friend. We sat in a coffee shop and somehow started discussing bad ads after dissecting few good ones.

“And it was then he revealed that he was approached to audition for the misogynistic deodorant ad. The moment he read the script, he proposed changing it. And for the people who work in advertising, and are aware of the production-house/actor power equation, they will understand how audacious the demand is!

“And when that didn’t happen, he politely refused to audition for it but not before pointing out the problem to the casting agent over a WhatsApp chat. I have taken Saurabh’s permission to put a screenshot of the chat snippet in my post. If only others involved with the project had the spine to do the same, the 2 ads (there were 3 in total btw) would not have seen the light of the day or darkness of the night!

“I am proud of you, Saurabh Verma. Hope your tribe grows🙌🏼 Would have loved to tag you in this post but you are not there on LinkedIn 🙁

“Saurabh Verma is an extremely talented actor and has worked on many popular ads for big brands. I really think people in my agency/production network should check out his work,” he wrote.

In its apology, the brand issued a statement on social media, saying, “This is with reference to our recent two TV advertisements of Layer’r SHOT on various broadcasting platforms. We, the brand Layer’r SHOT would like to inform one and all that only after due & mandatory approvals, we have aired the advertisements, wherein, we never intended to hurt anyone’s sentiments or feelings or outrage any women’s modesty or promote any sort of culture, as wrongly perceived by some.”