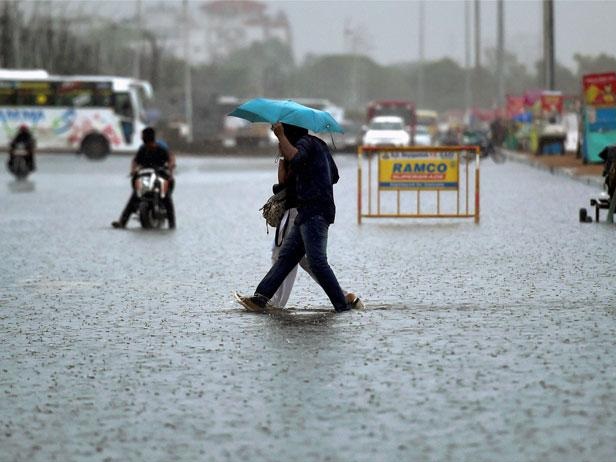 Rains lashed parts of Tamil Nadu and neighbouring Puducherry with the North-East monsoon in the last 24 hours claiming one life in the state capital, even as the Met office predicted more showers in the next two days. Various parts of the state have been receiving good rainfall since the onset of the monsoon on October 16. Director of area cyclone-warning Centre, Regional Meteorological Centre, N. Puviarasan told reporters that the presence of an upper air circulation caused heavy to very heavy rains.

“In the last 24 hours ending 8.30am on Sunday, Sathankulam in Tuticorin district recorded maximum of 19cm of rainfall followed by Cuddalore 17cm, Tirunelveli 15cm, Kancheepuram 13cm, ” he told reporters on Sunday. He said light to heavy rainfall may occur over the next 24-48 hours. “Ramanathapuram, Tirunelveli, Tuticorin, Vellore, Tiruvallur, Thiruvannamalai districts may receive very heavy rainfall in the next 24 hours,” he said.

In a major rain-related incident in Tamil Nadu, at least 15 people, including ten women, were killed when a wall collapsed on a row of houses in a village today. The 15-foot tall private compound wall, totally wet due to heavy rains lashing the area for the past few days, fell on the adjoining tiled-roof houses in Nadur village, over 50 kms from here, around 5 am, burying alive the inmates who were in their sleep. The Fire and Rescue services personnel with the assistance of locals and police retrieved the bodies from the debris and the operations were continuing, police said. Chief Minister K. Palaniswamy said 15 people, including two minors, were killed in the early morning incident.

To a query, Puviarasan said the rainfall recorded since October 1 was 39 per cent, which was three per cent higher than the rain received during the setting of the monsoon. For Chennai and its surrounding areas, he said light to moderate rainfall may occur over the next two days. “The city received 51 cm this season which is 9 per cent less compared to the normal 60 cm received during monsoon season,” he said.

He advised fishermen not to venture into sea at Cape Comorin, Lakshadweep area, as gusty winds were likely to occur due to the presence of depression in the Arabian Sea. To another query, he said Nagapattinam district received the maximum rainfall registering 81cm as against the 67cm normal during the monsoon season. Meanwhile, city Police Commissioner A.K. Viswanathan took stock of situation in the state capital and reviewed the measures taken following the heavy rainfall.

Talking to reporters, Viswanathan said all the departments have been alerted to take stock of situation in a coordinated manner. He said a Whatsapp group of officers has been formed to ensure that immediate steps would be taken. “Five teams from the State Disaster Relief Force have been kept on standby and teams from the National Disaster Relief Force, if required, may also join in,” he said. Several low-lying areas in the city were inundated. A 49-year-old man died at Ambattur on Saturday night after he accidentally fell into a stormwater drain.

An official from the Fire and Rescue Services Muthu Krishnan said they received information about the man falling into the 6-7 foot deep stormwater drain. Firemen rushed to the scene, and pulled the body out, he said. DMK chief M.K. Stalin took to social media saying district administration should take measures on warfooting following the rains. “Several low-lying areas were inundated, and power supply was cut. The district administration should take immediate steps,” he said in a Facebook post.

In neighbouring Puducherry, incessant rains hit normal life from this morning. Territorial Chief Minister V. Narayanasamy told newsmen at his residence the union territory saw nearly 12 cm of rainfall in the last 24 hours and the directorate of school education declared a holiday for schools and colleges on Monday.

The Chief Minister said he was recuperating after a knee replacement surgery, so he could not visit the rain-ravaged areas, but his ministerial colleagues had fanned out to different pockets for relief and rehabilitation works.

Most of the thoroughfares were water-logged disrupting vehicular traffic. Daily wage earners were hard-hit because of the inclement weather.  Reports from the southern districts said rains hit normal life by affecting rail and vehicular traffic and submerging crops. In some places, residents have been moved to safe ground as houses were marooned, officials said. Vehicular traffic in Tiruchendur and Tuticorin was affected.

Kovai Express and Pearl City Express were stopped at Melur as the tracks got submerged. State minister Vijayabaskar visited the flood-affected areasin Pudukottai district and was overseeing relief operation. The rain over the last two days in Tirunelveli, Tenkasi, Kanyakumari and Tuticorin resulted in most dams getting filled up, the officials said. The North-East monsoon accounts for about 48 per cent of the annual rainfall in the state.