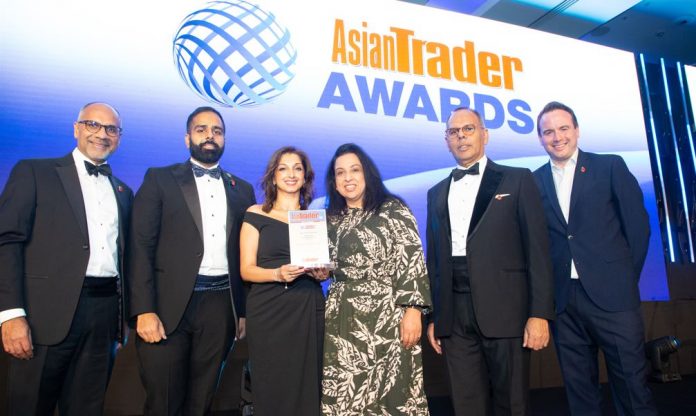 INSPIRATIONAL grocers were recognised for their achievements during a period of economic challenges and personal loss for the sector at the 33rd Asian Trader Awards, which took place at London’s Park Plaza Westminster Hotel last Wednesday (9).

The top award of the evening – the Asian Trader of the Year 2022 – went to Scottish independent retailer Shamly Sud.

Her achievement in transforming her flagship Racetrack Pitstop Premier store into a destination venue attracting shoppers from many miles around her hometown of Strathclyde was recognised as an inflexion point in the development of the industry. It showed the way forward for the vibrant retail sector to compete with supermarket chains, and to serve their local communities in ways that others simply could not match.

Sud, whom the judges called a true convenience entrepreneur, now runs 11 stores, with plans to open more and to franchise their own in-store concessions.

This year’s competition for Asian Trader Magazine’s top collection of grocery industry awards was more numerous and intense than ever, with the judges noting the quality of entrants and the difficulty of deciding between them.

Among the winners in the product category were Mondelez International for confectionery; PepsiCo for its Kurkure Asian-inspired snack; and CCEP for its Relentless Zero Sugar drink.

The winners among the retailers and wholesalers featured Parfetts for its Sheffield cash and carry depot in the Wholesale Depot of the Year category, while the Ram Solanki lifetime Achievement Award went to Steve Keil of Booker, a legendary industry figure.

Retailer Amrit Singh of Walsall in the West Midland won the coveted Spirit of the Community award, and Jayaseelan Thambirajah of MSP Noble Group, Cambridgeshire, took Convenience Chain of the Year. A new award for 2022, the OffLicence of the Year, to take account of the amazing progress in retailing the alcohol category by the convenience channel, was scooped by Neha Phoughat.

Kevin Hollinrake, minister in the Department for Business, Energy and Industrial Strategy, graced the occasion as chief guest, as leading suppliers, manufactures and wholesalers gathered to celebrate the very best of convenience retail.

Hollinrake expressed sympathy with independent retailers over crime, energy costs and the level of business rates.

He said, “Now, finally, we are moving towards a period where we can provide certainty and stability. Both government and business have much to do, and I can rely on the determination and resilience and innovation of your sector as we work together. Small business is the very foundation of a dynamic, productive economy that creates employment, and brings huge benefits for the consumer.”

Hollinrake paid tribute to the passing two months earlier of Asian Media Group (AMG) matriarch Parvatiben, widow of the late Ramniklal Solanki CBE, founder of the company as “a true spirit of community and a real pioneer in every sense of the word”.

He also described the prime minister, Rishi Sunak, as “the best person to run the country in terms of his intellect and talent, and also one of the most decent people to have ever entered British politics.”

Nish Kankiwala, who recently stepped down as CEO of Hovis plc and is now a non-executive director of the John Lewis Partnership, shared a table with Alpesh Mistry, sales director of Suntory Beverage and Food, and sponsor Sunmark Ltd’s general manager, Mohan Khurana.

By coincidence, the awards this year fell on the birthday of AMG’s group managing editor Kalpesh Solanki. After the resident band cheered him onstage with a rendition of Happy Birthday (“It was supposed to be a secret!” he joked), he spoke about the recent death of his mother on the same day as the Queen, linking together the growth and change that had taken place during the lives of both women.

“In the years of the Queen’s reign, Britain has become a kinder, gentler and freer society,” he said. “We are a more tolerant and welcoming society and the open racism of my parents’ generation has largely disappeared. And though there is still much to do to create a more equal society free of discrimination and prejudice, there is a deep sense of togetherness and community spirit in our country.”

Solanki also hailed the contribution made by independent retailers during the pandemic, describing them as “the heart of that togetherness”, but noted the new problems facing the sector.

These include the cost-of-living-crisis; additional regulation and red tape; duties and obligations, such as HFSS and the DRS scheme soon to be introduced in Scotland; and the way in which many local authorities “continue to create obstacles by making it difficult to shop on the high street, with ever more parking restrictions, low traffic neighbourhoods and introduction of cycle lanes”, he said.

His daughter Shefali introduced the charity appeal, which this year was in aid of the research at Imperial College of Dr Jiri Pavlu, who works at Hammersmith Hospital. His patients included Shefali’s grandmother Parvatibenm who he treated for Acute Myeloid Leukemia. A worthy and appropriate cause, and a somber moment in a joyous and successful evening honouring Asian Trader award winners.

Other product and manufacturer awards