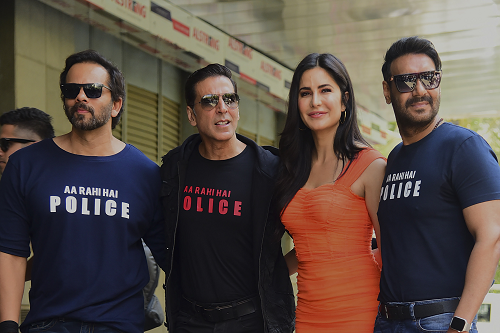 Rohit Shetty’s Sooryavanshi starring Akshay Kumar, Katrina Kaif, Ajay Devgn and Ranveer Singh is all set to release on 5th November 2021. The promotions of the film are going on in full-swing, and recently, the poster of the film was showcased at Times Square in New York City.

Sooryavanshi is expected to revive the cinemas in India. It is one of the first biggies to release after the second wave of Covid-19 in the country.

The movie was slated to release in March last year. Later, the makers decided to release it in April this year. However, it was once again postponed, and it will now release during the Diwali weekend.

In the past few months, theatres in many states of India have been opened. But, many filmmakers were waiting for theatres in Maharashtra to be reopened.

Finally, in September last week, it was announced that theatres in Maharashtra will reopen from 22nd October 2021, and Shetty quickly announced that Sooryavanshi will release during Diwali.

They had posted on Instagram, “Verified Thanks to our Honourable Chief Minister, Shri Uddhav Thackeray, theatres in Maharashtra to reopen from 22nd October. And FINALLY!!! we can say, This DIWALI… AA RAHI HAI POLICE…”

It will surely be interesting to see what response Sooryavanshi will be getting at the box office.