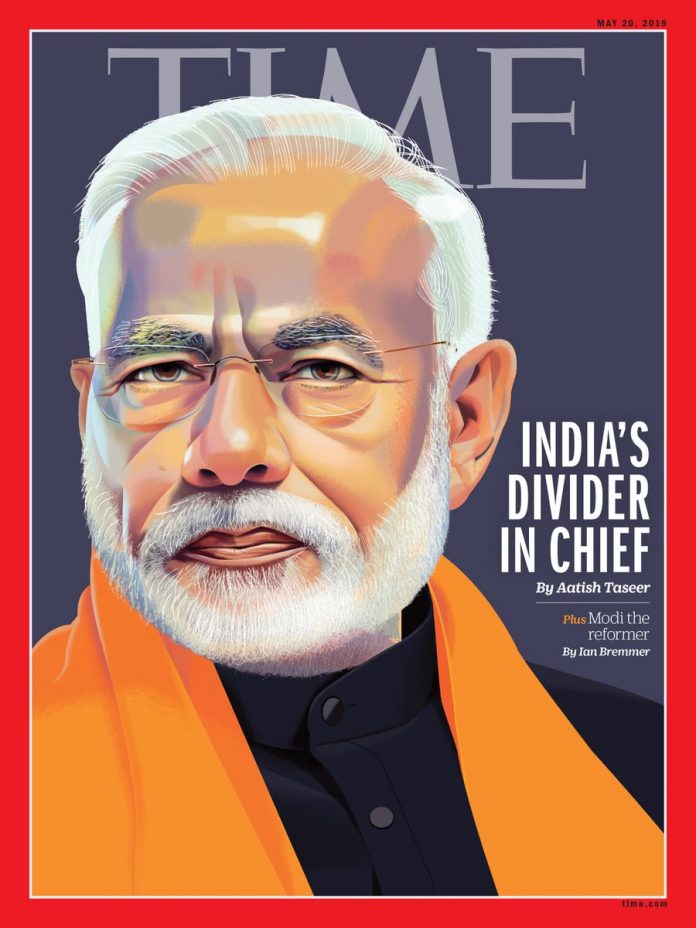 Popular US news magazine Time on Friday revealed the cover of its new international issue and it is already causing a stir in India.The cover features an portrait of Prime Minister Narendra Modi with the headline India’s Divider in Chief. The Mahila Congress, the women’s wing of the main opposition party, tweeted about the Time cover, stating “Sitting PM makes it to the cover of Time Magazine”.
The Mahila Congress also added, “Your truth is for all to see,” tagging Modi.Modi’s predecessors have also featured on the cover of Time Magazine. In July 2012, Time had Manmohan Singh on the cover, calling him an “underachiever” for his perceived inability to accelerate economic reforms.
Aam Aadmi Party leader Preeti Sharma Menon reacted to the Time cover by tweeting, “Yayyy! All the bhakts must be so excited. Modiji is on @TIME’s cover page”.Activist-lawyer Prashant Bhushan also tweeted about the Time cover on Modi.
The Time issue on Modi has two prominent articles. One is by columnist Aatish Taseer, who asks, Can the World’s Largest Democracy Endure Another Five Years of a Modi Government?

Time Magazine: Can India endure another 5 yrs of Modi? "As India gets ready to give this willful provincial, so emblematic of her own limitations, a second term, one cannot help but tremble at what he might yet do to punish the world for his own failures" https://t.co/V4RPOrtc57

Taseer places the rise of Modi in the context of populist sentiment seen in countries across the world. Taseer writes, “It forces us to reckon with how in India, as well as in societies as far apart as Turkey and Brazil, Britain and the US, populism has given voice to a sense of grievance among majorities that is too widespread to be ignored…”
Taseer refers to Modi’s inability to bring economic growth and usage of Hindutva. Taseer notes Modi “has in every field, from politics and economics to Indology itself, privileged authenticity over ability, leading India down the road to a profound anti-intellectualism.”

Yayyy! All the bhakts must be so excited. Modiji is on @TIME's cover page. #DividerInChief they call him – "Not only has Modi’s economic miracle failed to materialize, he has also helped create an atmosphere of poisonous religious nationalism in India." https://t.co/oK4xv2Yh47

Taseer concludes on an ominous note, “Modi’s India feels like a place where the existing order of things has passed away, without any credible new order having come into being. Modi has won—and may yet win again—but to what end?”
Interestingly, Modi has featured on the cover of Time Magazine earlier also. In May 2015, Time had an image of Modi with the headline Why India matters. The issue also featured an interview with Modi.