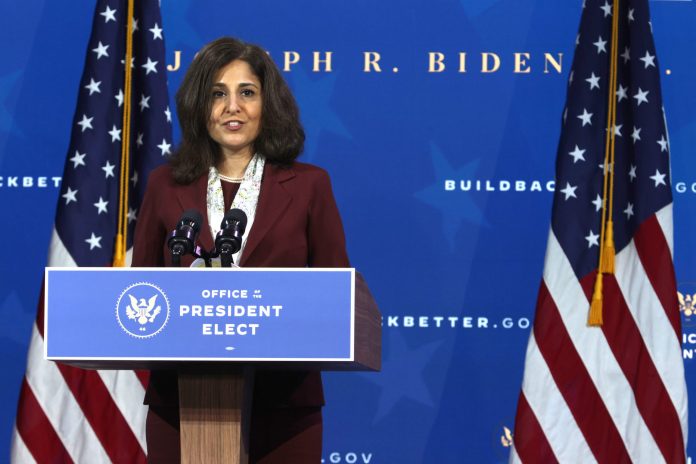 Neera Tanden, who has been nominated as the director of management and budget by president-elect Joe Biden, on Tuesday (2) shared the inspiring story of her mother who immigrated to the US from India.

“Like the vice president-elect’s (Kamala Harris) mother, Shyamala, my mother, Maya, was born in India. Like so many millions, across every generation, she came to America to pursue a better life,” said Tanden at the Biden Transition headquarters in Wilmington, Delaware.

“I was raised in a suburb of Boston — a middle-class kid. But when I was five, my parents got divorced and my mom was left on her own with two children — and without a job,” said Tanden, who was born in Bedford, Massachusetts to immigrant parents from India.

After her parents divorced, Tanden’s mother was on welfare for nearly two years before obtaining a job as a travel agent.

“She faced a choice: return to India, where at the time divorce was stigmatized and opportunity would be limited, or keep fighting for her American Dream. She stayed, and America came through for her when times were tough. We relied on food stamps to eat. We relied on Section 8 vouchers to pay the rent. We relied on the social safety net to get back on our feet,” she said.

“This country gave her a fair shot to reach for the middle class and she made it work. She got a job as a travel agent, and before long, she was able to buy us our own home in Bedford, Massachusetts, and see her children off to college, and beyond,” Tanden said.

Neil Makhija, the executive director of IMPACT, the leading Indian-American advocacy and political action committee, said that Tanden understands the power of the American Dream.

She was raised in an immigrant family that benefited from America”s social safety net as a ladder to climb to the middle class, he said.

“Despite making it to the highest levels of government, she refused to forget where she came from, never backing down from the toughest battles to fight for the American worker.

“In Neera Tanden, president-elect Biden has chosen an ideal partner to restore the American dream because she has lived it,” he added.

Senate minority leader Chuck Schumer said Tanden is an eminently qualified nominee who would be the first woman of colour to ever run the Office of Management and Budget.