Home Arts and Culture Muslim take on a Hollywood rom-com 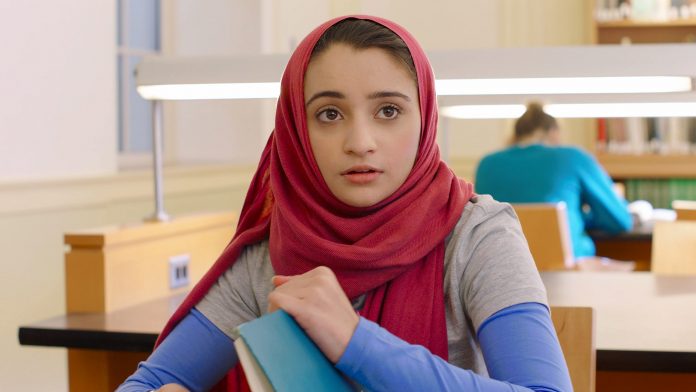 The unique romantic comedy with female Muslims at the forefront revolves around a single New York-based first-generation immigrant mother trying to find suitable matches for her two daughters and a visiting niece from Pakistan. But the girls with different personalities have their own individual life plans.

The film has admirably been masterminded by director Iman Zawahry and lead actress Aizzah Fatima, who have both also cowritten and co-produced it.

Both spoke with Eastern Eye about the charming Americanish, which has moments, characters and a story not traditionally seen in English language films.

What is it that first connected you to creativity?
Iman: I grew up in a very small boring town in the South. We didn’t have much to do, so watched a lot of television and movies. We would make skits and commercials, and that was like my first time creating, editing, and telling the actors what to do, because I was directing them – I wasn’t acting. We faced a lot of racism in the South, so every time we had to deal with something it was through comedy, and we’d make these hilarious skits.
Aizzah: For me, I just grew up around a lot of it. My dad is a published poet, my mom is very artsy – she’s always creating things. I think I just grew up in a very creative environment!

What inspired Americanish?
Aizzah: The four female characters – Khala, Sam, Maryam and Ameera, all come from my one-woman show, so we took four of those characters and made a feature film around them.

Tell us about the film?
Iman: The film is about three American Muslim Pakistani women figuring out love, life, and career in New York City. Each of the women are dealing with how to find their love, not necessarily in the way we think, and they find out that what they thought was the best for them isn’t always the case.

Is the film’s story based on real life experiences?
Aizzah: The characters from the play all come from real characters in real experiences. For the film, some things changed but a lot of the journeys remained the same. All of it comes from something very real.

How much of a challenge was it for you to get a film like this made in America?
Iman: An enormous challenge! We struggled tremendously. First, it was challenging to write a script as first-time feature film writers, and then an ensemble piece. After four years of touring the country and raising money, we’re really proud to say 100 per cent of our investors are American and UK Muslims. It was a tremendous challenge for us.

What is your favourite moment in the movie?
Iman: My favourite moment is anything with Khala and Ameera. Another favourite is when Sam and Zane are in the subway.
Aizzah: I feel like there are honestly so many. The fact that we made a black man the lead of a romantic story – I love all of those moments. I love that we put a Palestinian-Arab man in a cop uniform and he’s badass.

How did you balance producing and writing, along with directing and acting?
Iman: That was pretty challenging for sure – producing was really very challenging. I can never wear the hat of just one.
Aizzah: I think we struggled a lot on Americanish, because we were naïve and didn’t set up the right structures for ourselves. We also learned a lot and we’re better filmmakers for it.

What audience are you hoping connects with this film?
Iman: Everyone!
Aizzah: We’re in the business of telling universal human stories and that’s what this is.

How do you feel about it being screened at the London Indian Film Festival?
Aizzah: It’s our international premiere, we’re so excited to have this! And I think it’s also our last (festival) screening so it’s extra exciting.
Iman: I am super honoured and happy that it’s being played at LIFF.

What can we expect next from you?
Iman: Our goal is very similar to tell stories of Muslim women being agents of their own lives. Hopefully, we can infiltrate from all directions in terms of getting BIPOC characters, and strong Muslim women and just women in general on-screen.

Is it becoming easier for female filmmakers?
Aizzah: I think now more than ever, there’s so many things out there – but what does all of that stuff truly lead to? I think there’s a lot of talk right now, which is great – I think, maybe, we’ll get there.

Who is your own filmmaking hero?
Iman: I’m a huge fan of Mira Nair. When she made Mississipi Masala that was the first time I had seen brown women on screen. I was like, ‘oh wow, there can be a brown female director’.
Aizzah: There’s a lot of amazing filmmakers who come from India, but truly the people who inspire me are the independent filmmakers – my colleagues. People who are creators.

What are some of your own all-time favourite films?
Iman: One of my favourite movies is The Godfather. It’s all 1980s Tom Hanks comedies like The Burbs and Money Pit.

Why should we all watch the film Americanish?
Aizzah: It’s a human story that is told for a universal audience. So, if you like to laugh, come and watch this, and if you don’t like to laugh, still come and watch it.
Iman: No matter your background, you’re seeing three female leads, brown leads, and even Muslim leads, and it’s something you’re seeing in a very relatable and reminiscent way.

Americanish is being screening as part of London Indian Film Festival at Picturehouse Central (June 26) and Ciné Lumière (June 29). www.londonindianfilmfestival.co.uk