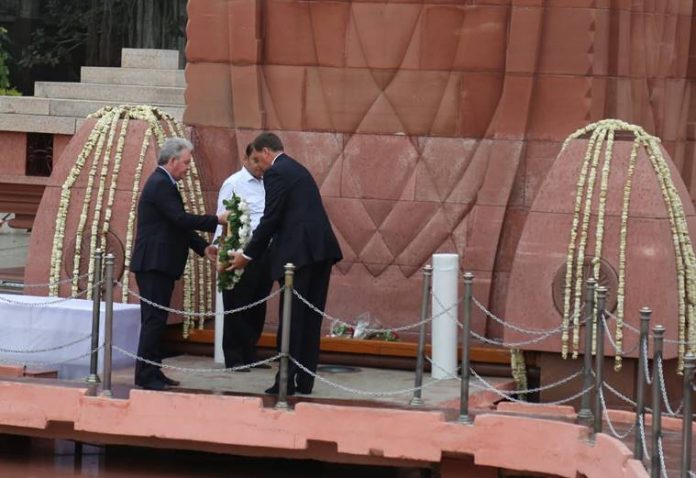 British High Commissioner to India Dominic Asquith, who laid a wreath at the Jallianwala Bagh Memorial here on Saturday to mark the centenary of the massacre, said Britain deeply regretted the incident that took place on this day a hundred years ago.
Asquith visited the Jallianwala Bagh Memorial in the morning to pay homage to those killed in the incident on April 13, 1919. He laid a wreath at the memorial inside the historic Jallianwala Bagh.
“The events of Jallianwala Bagh 100 years ago today reflect a shameful act in British-Indian history. We deeply regret what happened and the suffering caused,” Asquith wrote in the visitors’ book at the memorial.
“I am pleased today that the UK and India have and remain committed to developing further a thriving 21st century partnership,” he added.
In his brief interaction with reporters later, Asquith said British Prime Minister Theresa May on Wednesday described the Jallianwala Bagh massacre as a “shameful scar” on British Indian history.
May, however, stopped short of offering a formal apology.
Asked why an apology was not tendered by the British government, Asquith said, “I know this is a really important question. I would just ask you to respect what I came here to do, which is to commemorate those who died a hundred years ago and to express the sorrow of the British government and of the British people.
“But I would repeat what I said earlier that both governments are committed to building a very strong relationship…we have an extraordinarily flourishing relationship today.”
He pointed out that former British prime minister David Cameron, during his visit to India earlier, had expressed regret and termed the Jallianwala Bagh tragedy a “deeply shameful scar”.
Asquith also added that the Queen (Elizabeth II) had spoken of the incident as a distressing example of Britain’s past history with India.
The British envoy said his great-grandfather H H Asquith, who was the prime minister of Britain between 1908 and 1916, had referred to the Jallianwala Bagh tragedy as one of the worst outrages.
“My own great grandfather, who was the prime minister for almost a decade, had referred to this as one of the worst outrages in our whole history,” he said.
The massacre took place at Jallianwala Bagh in Amritsar during the Baisakhi festival in April 1919 when the British Indian Army under the command of Colonel Reginald Dyer opened fire at a crowd staging a pro-independence demonstration, leaving scores dead.