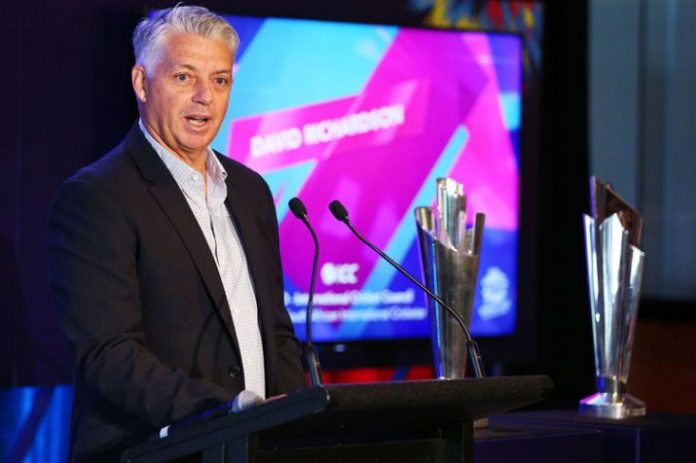 India are not in danger of losing the hosting rights of the 2021 Champions Trophy and 2023 World Cup despite tax exemption issues, the International Cricket Council (ICC) CEO David Richardson declared Thursday, ending speculation that has swirled around the two events.
The Indian government refused to give tax exemptions to the ICC when the country hosted the 2016 World T20 following which the game’s governing body asked the BCCI to either pay USD 23 million (Rs 161 crore) as compensation or lose the 2023 World Cup rights.
“Getting tax exemptions is very important for world cricket because every cent that is made by the ICC revenue wise is put back into the game. This helps countries like the West Indies who don’t generate as much revenue,” said Richardson at an event to announce a five-year partnership with Coco-Cola. “But having said that there are no plans of taking away the hosting (from India) and I’m sure we will get it (exemption) in the end, we’ve still got a lot of time,” he added.
The schedule for the 2020 T20 World Cup was announced earlier this week and India and Pakistan won’t meet in the group stages for the first time since 2011. Richardson explained that the groups were decided on the basis of rankings and there was no credible way for the two neighbouring nations to meet before the semifinals.
“We have arranged the groups in a way that has credibility and is based on the ranking system. The teams are placed according to their ranks. In this case, Pakistan were number one in the rankings in their group and India number two,” Richardson said.
“…we found no credible way of putting them in the same group. Hopefully from a world perspective they will meet each other in the semifinals or final.” One of the serious problems the ICC is facing is the ever-increasing threat of corruption in the game, Richardson said the ICC’s Anti-Corruption Unit (ACU) is pro-actively working to curb the menace.
“It’s not just about anti-corruption but also about player conduct. In recent times, we have had several unruly incidents around the world and we have taken really firm steps there to make sure that everybody understands we need to protect the spirit of cricket.” “We have taken a more proactive approach to disrupt the actions of certain frivolous individuals that wander around trying to fix cricket matches. We continuously are trying to disrupt them as much as possible and the players are doing the right thing by reporting any incident.”
Richardson, who will step down after the World Cup in July, was asked about the highs and lows of his time in office, the South African said convincing India to use DRS was a memorable achievement for him. “Some things took a little longer than we’d like to implement. One of them was to convince India that DRS was a good thing. It probably took so long because in the first trial that we conducted, all the decisions seemed to go against India. So we had to convince Anil Kumble that it could work,” he said.