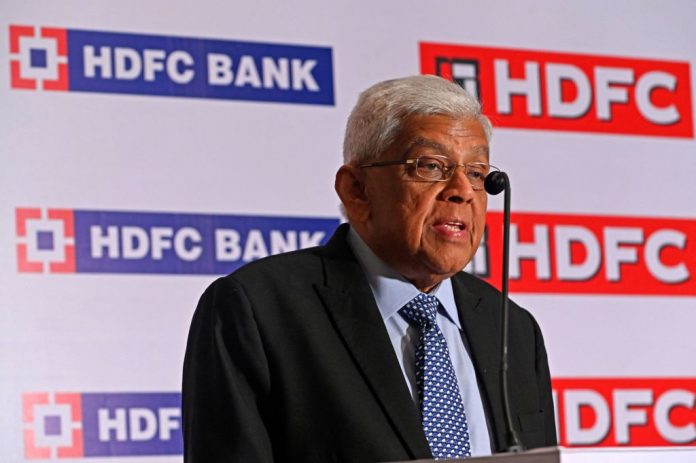 INDIA’S largest private lender HDFC Bank will absorb its parent company, the Housing Development Finance Corporation (HDFC), in what will be the country’s biggest-ever merger deal.

“As the son grows older, he acquires his father’s business. That’s all (that is) happening here,” HDFC chairman Deepak Parekh told a media briefing on Monday (4).

Every HDFC shareholder will get 42 shares of HDFC Bank for 25 shares held.

“This is a merger of equals,” Parekh said.

“We believe that the housing finance business is poised to grow in leaps and bounds due to the implementation of RERA (Real Estate Regulatory Authority), infrastructure status to the housing sector, government initiatives like affordable housing for all, amongst others.”

The HDFC-HDFC Bank merger is expected to be completed by the second or third quarter of the fiscal year 2024.

HDFC said the proposed transaction shall enable HDFC Bank to build its housing loan portfolio and enhance its existing customer base.

The merger is subject to approvals from the Reserve Bank of India and other regulatory authorities.

HDFC Bank has a large customer base of 68 million and a diversified low-cost funding base for growing the long-tenor loan book.

“A combination of the Corporation and HDFC Bank is entirely complementary to, and enhances the value proposition of HDFC Bank,” HDFC said.

“HDFC Bank would benefit from a larger balance sheet and net worth, which would allow underwriting of larger ticket loans and also enable a greater flow of credit into the Indian economy.”

“The proposed transaction is to create a large balance sheet and net-worth that would allow a greater flow of credit into the economy,” it said.

While HDFC Ltd is a significant provider of home loans to the low and middle-income group segment under the affordable housing initiatives of the government of India, HDFC Bank has a presence in more than 3,000 cities and towns through its 6,342 branches.

Leveraging this distribution might, the proposed merger would broaden the home loan offers.

Shares in HDFC and HDFC Bank jumped 16.5 per cent and 12.5 per cent respectively on the Bombay Stock Exchange after the merger announcement.

Post-merger, HDFC Bank will be twice the size of ICICI Bank, which is the third-largest bank in India now.

This is the second reverse merger in the banking sector after ICICI Ltd did a similar amalgamation with its banking arm ICICI Bank in October 2001.