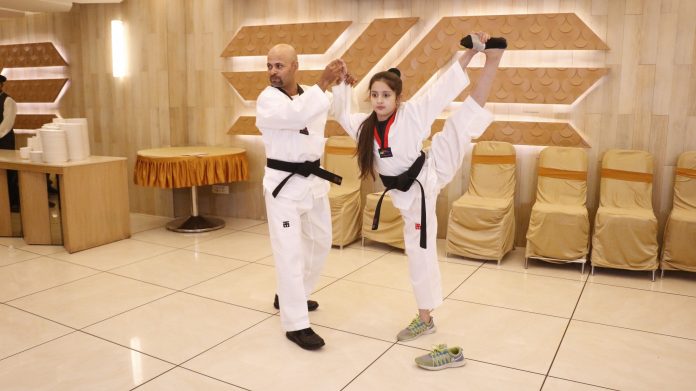 Think of a biopic and you did imagine a tale about grit, determination and eventual success spread over a lifetime. But in what is touted to be the first sports biopic to be made in Gujarati, a movie will capture the journey of a sub junior martial arts gold medal winner at the national level who is just 10 years old!
DIYA – THE WONDER GIRL is a biopic of a 9 years old Gujarati girl DIYA from Ahmedabad who becomes a Sub Junior Martial Arts National Gold medal winner in Korean Taekwondo, within short span of one year of practice, through her mother’s motivation, her own sheer determination and hard work.
Her journey from learning and practising Martial Arts to Winning Gold medal was not an easy. While participating in a Sub Junior District Level Tournament, she gets badly beaten up by her better opponent and got injured. She has to be hospitalized for a few days.
This incidence leads Diya to give up the training and efforts of her mother, in process Diya’s father and family members forced her to quit practising. It was willpower and determination of Diya to decide on again coming back to the game with commitment to serious practice. It was equally hard time for her coachMahendra as well but with her practise she started winning tournaments.
Suraj Wadhawa who plays Diya’s coach in the movie is a Taekwondo trainer in real life. Interestingly, Patel said she has had no training in acting but believes that inherently all kids have an actor in them. “When you don’t get ice cream you often feign tears or act as if you have been terribly hurt. That too is acting. I think kids intuitively know how to act,” said the young Patel laughingly. She aspires to be a pilot, an Olympic gold medalist and an actor when she grows up.