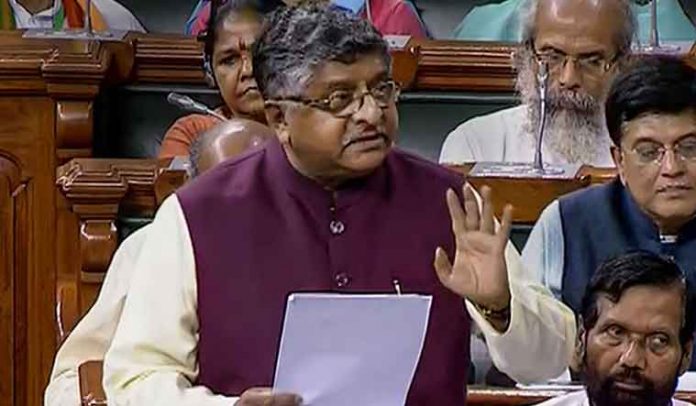 A day after India’s top mobile phone service providers announced an increase in call and data charges, Telecom Minister Ravi Shankar Prasad on Monday said mobile internet rate in the country remains by far the lowest in the world.

Bharti Airtel Ltd, Vodafone Idea Ltd and Reliance Jio Infocomm Ltd had on Sunday announced the rise in the cost of subscriptions to their plans with effect from Tuesday. “India’s mobile internet rate per GB remains by far the lowest in the world. The UK-based http://cable.co.uk which compared mobile data plans around the world has indicated this,” Prasad tweeted posting the comparative chart made by the price comparison site in March 2019.

“The mobile phone mess was the scam-tainted legacy of UPA. We have set it right, expanded mobile telephony with consumer satisfaction. Also committed to making BSNL/ MTNL professional and profitable,” Prasad said in another tweet.

The hike in tariff comes weeks after the Supreme Court upheld the government’s definition of adjusted gross revenue (AGR), which is the basis on which telecom companies’ licence fees and spectrum usage charges are paid. Bharti Airtel, Vodafone Idea and other telcos face as much as Rs 1.47 lakh crore in past liabilities following this ruling.

Vodafone Idea and Bharti Airtel have announced new tariffs effective December 3 where headline data plans are priced 15-47 per cent higher. Both have removed their 1 GB per day plans (Rs 399 for 84 days) keeping just the 1.5 GB a day 84-day plan that itself is now 30 per cent more expensive at Rs 599 (from 459 before).

Vodafone Idea though has retained a Rs 379 plan which gives 6 GB data for 84 days. Jio would raise tariffs by up to 40 per cent from December 6 and also with 300 per cent more benefit.While Airtel and Vodafone Idea have increased the pricing at the lower end voice-centric plans from Rs35/Rs65 to Rs49/Rs79, the pricing for 28-day unlimited combo plans have increased by 15-30 per cent.

The pricing for the most popular 84-day unlimited plan has increased by 30-36 per cent. Following Jio’s footsteps, both Bharti Airtel and Vodafone Idea have also introduced caps for off-net calls as part of their ‘unlimited calling’ benefits. According to Credit Suisse, post the tariff hikes, Bharti Airtel and Vodafone Idea’s plans are at a 20-60 per cent premium over Jio’s October 2019 ‘All-in-plans’. “We think after Jio’s announced tariff hikes, the premium is likely to decline to 10-20 per cent for the more popular tariff plans.” It expected more tariff increases over the next 12-18 months.