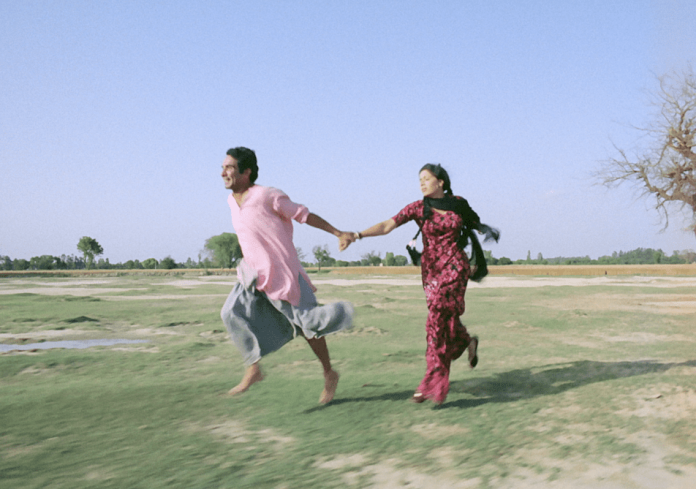 SIMRAN SIDHU ON THE PUNJABI CLASSIC AND HIS PLANNED SEQUEL

PUNJABI cinema has enjoyed an incredible resurgence in recent years with contemporary films clocking up huge box office numbers, but perhaps the most interesting release of 2022 has been a remastered version of all-time classic Chann Pardesi.

Widely regarded by many as the greatest Punjabi film ever made, the multi-layered rural drama received great acclaim and a National Award when it released in 1981. British-Punjabi filmmaker Simran Sidhu played an integral role in remastering the iconic movie and is planning a sequel.

Eastern Eye caught up with the writer-director to discuss the magic of Chann Pardesi and his remastered version.

What is your first memory of classic film Chann Pardesi?
Unlike many, I didn’t grow up watching Chann Pardesi on video. While studying my MA in Filmmaking at The London Film School, my father Dr Chanan Singh Sidhu showed me Chann Pardesi to demonstrate what Punjabi films were capable of. In addition to the raw emotional power of the film, I was astonished by how confidently staged the scenes were. The craftsmanship was unlike anything I’d seen in any mainstream Indian film.

What led towards you wanting to remaster the film?
While talking about possible next steps after film school, my father suggested inviting his old friend Baldev Gill, the writer of Chann Pardesi, to our London home. We thought it would be a great idea to spend time together, reconnecting and learning about the realities of the film world. My father suggested to him that we re-release  Chann Pardesi.

What did you think of the idea?
Having recently seen Francis Ford Coppola’s restoration of The Godfather, I said, sure. I thought Hollywood restores, remasters, and re-releases their films all the time, but no one has done that with a Punjabi classic. Baldev Gill agreed and thought my father was the only one with the capability of pulling something like this off.

What was the next step?
We bought up all the film’s rights, including the original 35mm negative kept in a state of disrepair at the National Film Archive in Pune. We got FilmLab Mumbai to wash the damaged fungus-filled reels with water and chemicals, before scanning them into a computer at high-resolution. They restored the damage frame-by-frame. (cinematographer turned director) Manmohan Singh returned to do a new DI colour grade on the film. One of the original film financiers, Mr JS Cheema, gave it a new 5.1 surround sound mix. The remastered film looks like it could have been shot yesterday.

For those who haven’t seen it, tell us about the story?
Without wanting to spoil the twists, it’s about a childless landlord (Amrish Puri) desperate for an heir. He sets his sights on the village beauty, Kammo (Rama Vij), who is in a relationship with the Jagirdar’s best farmhand Nek (Kulbhushan Kharbanda). What happens next starts an epic story that spans generations.

What makes the film so special?
Aside from being a masterpiece and National Award winner, Chann Pardesi launched the careers of several superstars of south Asian cinema, like Amrish Puri, Raj Babbar, Om Puri, Kulbhushan Kharbanda. All were unknowns when the film was shot in 1979. In 2022, it plays like an ensemble of Hindi cinema legends performing in perfect Punjabi. The soundtrack also features greats like Mohammad Rafi and Asha Bhosle. It has a career-best performance of legendary comic actor Mehar Mittal. Legendary writer Javed Akhtar recently said he was ‘shaken’ by Chann Pardesi when he saw it decades ago. It truly is the ultimate cinematic experience.

What is your own favourite moment from the film?
I love the shot of Rama Vij standing in the sandstorm. I designed the trailer and poster around this central shot that so perfectly conveys the emotions of the film’s central character. It’s pure cinema, and arguably one of the greatest shots in film history.

What is the key message of this film?
There is a very strong subtext to do with oppression of women and of lower classes. I think the film is hopeful that a brighter future awaits society if we can fully and unashamedly atone for our past sins.

You must be happy that Punjabi cinema is doing so well?
I’m extremely proud of what Punjabi cinema has achieved. Punjabi music is a global powerhouse. Manmohan Singh jumpstarted Punjabi cinema post-militancy with Jee Aayan Nu in 2002. While Punjab’s film industry remains an outgrowth of its music industry, there has been an encouraging variation and evolution of genres. While light-hearted musical comedies remain popular, I think Punjabi audiences are ready for a new type of film experience.

You are writing and directing a true sequel to Chann Pardesi. Tell us about that?
At the very beginning of Chann Pardesi, there is a card that cites inspiration from the great Balraj Sahni and his dream of good Punjabi cinema. Our goal is to continue that mission, by pushing the boundaries of Punjabi cinema. I have spent several years writing the script for a legacy sequel that takes place four decades after the original. Chann Pardesi told the story of two generations, while the sequel focuses on the third generation. A lot has changed in four decades, and Chann Pardesi offers a vast canvas to explore exciting new ideas and aesthetics.

Who is your filmmaking hero?
I have many. Currently, I am most inspired by the ethos of the Wachowskis (The Matrix), who make mainstream films that seem to redefine the cinematic medium every time they pick up a camera. Their films are often controversial, but no-one can deny their courage in attempting to push the form in new directions.

What inspires you as a filmmaker?
Socio-politics, nature, family, and philosophy. Everything that inspires me as a human being also inspires my filmmaking.

Why should we watch Chann Pardesi?
This is a once-in-a-lifetime chance to see the best Punjabi film with the best picture and best sound on the best screen.