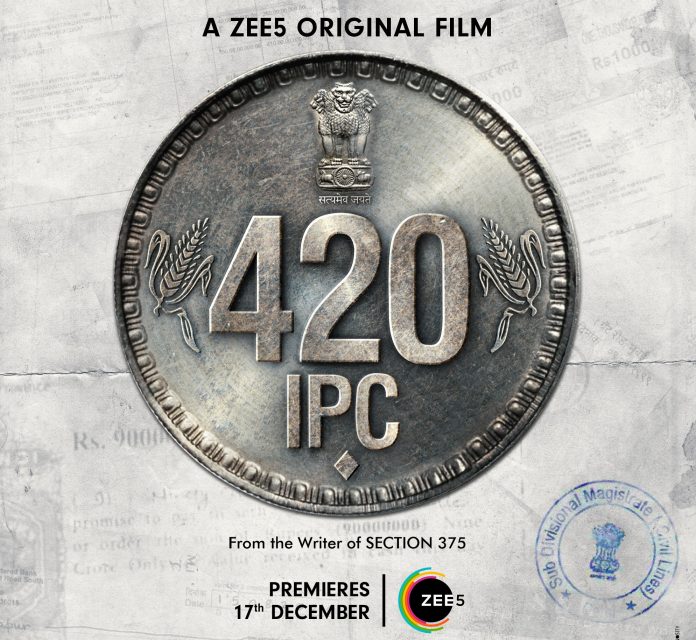 The leading home-grown OTT platform, ZEE5 on Monday announced the premiere date for its upcoming suspense thriller film 420 IPC. Featuring Vinay Pathak, Ranvir Shorey, Gul Panag, and Rohan Vinod Mehra on the ensemble cast, the film will start streaming on the platform from December 17. It is directed and written by Manish Gupta and produced by ZEE Studios and Kyoorius Digital P.L.

Manish Kalra, Chief Business Officer, ZEE5 India said the courtroom drama will surely entertain the audience. “420 IPC is a riveting suspense film involving an economic offence. This courtroom drama is sure to keep the audience hooked till the last frame and we are thrilled to bring this forth in collaboration with Manish Gupta who has delivered another engaging script post the success of Section 375,” Kalra said.

Producers Rajesh Kejriwal and Gurpal Sachar said they are excited to release the film on a platform like ZEE5. “Our vision is to produce content driven cinema; hence we chose 420 IPC as our maiden co-production with Zee Studios as this is a power packed script written and directed by Manish Gupta. We are excited to partner with a homegrown platform like ZEE5 which is available in over 190 countries and are sure that 420 IPC will see great success,” they said in a joint statement.

Gupta said the film is a result of the extensive research he did while writing the story. “An intricate web-like plot woven around the mechanics of economic offences is the crux of the film and the mystery unfolds slowly and steadily in the film, keeping one intrigued till the end. The film is a result of extensive research, and I am glad that the viewers will finally get to see the outcome, soon on ZEE5,” the director added.