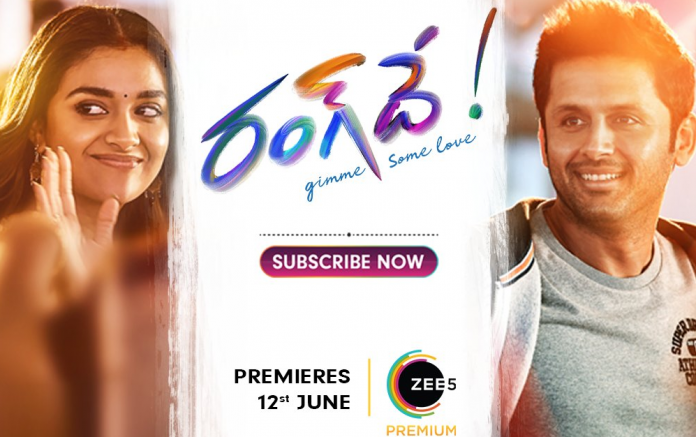 Announcing the release date of the romantic comedy film on Friday, ZEE5 tweeted, “The film that you have been waiting for a long time, the magical love tale Range De streams from 12th June only on ZEE5.”

The digital release of Rang De comes after over two months of its theatrical release. The film hit the silver screen on March 26, 2021, and garnered positive response from critics and audiences. However, it could not perform to its full potential due to the second wave of the coronavirus pandemic in India.

Aside from Keerthy Suresh and Nithiin, the film also features actors Naresh, Kausalya, Rohini, Brahmaji, and Vineeth in important supporting characters. It is written and directed Venky Atluri, who has previously helmed Tholi Prema ((2018) and Mr Majnu (2019).

Produced by Suryadevara Naga Vamsi under the banner of Sithara Entertainments, Rang De has music by Devi Sri Prasad. The album of the film did really well and it, in fact, helped draw audiences to theatres. Award-winning cinematographer PC Sreeram has handled the camera.

Meanwhile, Keerthy Suresh is looking forward to the release of her upcoming films, which include Marakkar: Arabikadalinte Simham and Good Luck Sakhi. She also plays female lead in Annaatthe, Saani Kaayidham, Vaashi, and Sarkaru Vaari Paata.

Nithiin, on the other hand, is busy with his much-awaited Telugu remake of superhit Hindi film Andhadhun. The Telugu remake has been titled Maestro and will also feature Tamannaah and Nabha Natesh in important roles. Merlapaka Gandhi is calling the shots.

Rang De is scheduled to stream on ZEE5 from June 12.