Home HEADLINE STORY “We won’t tolerate unrest in our city” 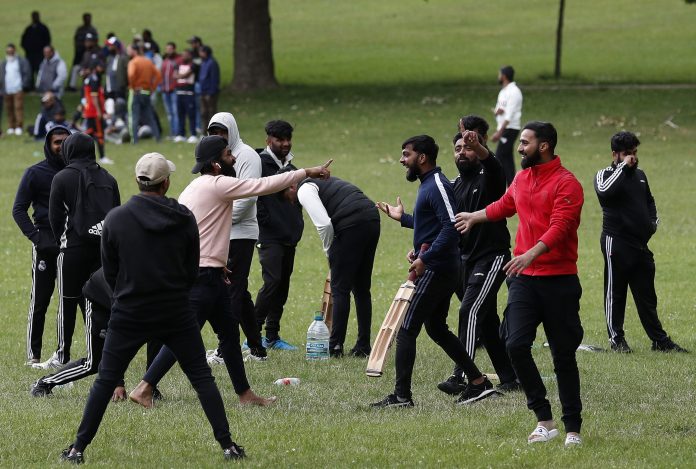 Outsiders are coming to Leicester to cause tensions among the city’s south Asian communities, sources have told Eastern Eye.

In the past three weeks, police arrested 47 people following violence in the city. Last weekend (16-17), they arrested 18 suspects, and some of those were from outside the city, sources said.

“We saw last night a group of people from other cities come to our city to disrupt and cause harm,” said the temporary chief constable, Rob Nixon.

“We will not stand for this unrest in our city.

“There is an extensive policing operation on going, acting on information and reports of gatherings and offering community reassurance.”

On Monday (19), a 20-year-old man was jailed for 10 months after his arrest during the disorder. Amos Noronha, of Illingworth Road in Leicester, pleaded guilty to the possession of an offensive weapon.

Nixon said, “Be reassured, we are working to keep you safe and to arrest and bring to justice those that are causing harm in our communities.”

“We in Leicester have built relations which are deeply rooted and very robust,” he told Eastern Eye.

“We have to draw on that experience now to ensure that people in Leicester remain calm and focused and not allow others to use lies to disrupt our city.”

Claudia Webbe MP, who represents Leicester East, said, “These acts of aggression and provocation are by and large from a minority of fringe elements led and inspired by extremism and right-wing ideology which is rearing its ugly head in the UK and here in our peaceful city of Leicester.

“Their focus is to incite religious and racial hatred, and which are deliberately designed to cause fear, alarm and distress and in order to provoke a reaction.

“This kind of right-wing racism and fascism has no place in society and the communities of Leicester stand united against it.”

Leicester Council of Faiths chair, Fayyaz Suleman, said, “Leicester has no place for any foreign extremist ideology that causes division.

“Our message to anyone that sows disharmony between us is clear ‘we will not let you succeed.’

“We together call upon the immediate cessation of provocation and violence – both in thought and behaviour.”

In the aftermath of the riots in the north of England in 2001, independent advisers who investigated their causes held up Leicester as the model of multicultural integration.

“It still remains the case that we’re a beacon of multiculturalism,” said Vaz.

“Whatever the trigger was that caused these disorders, nobody knows the complete picture of how they started.

“We need to engage with the communities, address these issues and remind everybody of the huge cultural tapestry that is Leicester.”

Sources in Leicester blamed India’s cricket victory over Pakistan in Dubai’s Asian Cup on August 28 as the catalyst for the violence.

But other reasons, also unconfirmed, are circulating among the communities.

Videos on social media appear to show groups in masks burning a flag with Hindu symbols.

It prompted immediate condemnation from the Indian High Commission in London.

“We strongly condemn the violence perpetrated against the Indian community in Leicester and vandalisation of premises and symbols of Hindu religion,” it said in a statement.

“We have strongly taken up this matter with the UK authorities and have sought immediate action against those involved in these attacks.

“We call on the authorities to provide protection to the affected people.”

Hindu sources in Leicester said that message was “unhelpful because the violence affects all faith communities, not just ours”.

Muslim civic and religious leaders condemned what they described as “deplorable and atrocious behaviour”.

Former president of the Leicestershire Asian Business Association, Jaffer Kapasi, told Eastern Eye, “We must maintain peace, harmony and calm, which we have cultivated for 50 years, whatever the cost.

“I’m prepared to pay from my own pocket to replace the Hindu flag which was damaged, and I think the whole Muslim community should pay together.

“It’s taken us ages to build those relationships, and we need to make sure everyone’s respected, whether they are Muslim, Hindu, Sikh or Christian.

A spokesperson for Leicester’s Council of Faiths told Eastern Eye, “We are concerned about the escalation between groups of individuals with particular agendas and grievances.

“We urge people to be calm and united against any form of excitement.

“We also call for vigilance and cooperation with the police with any information on the perpetrators.

“Faith leaders are united in our resolve to overcome this tense situation.

“More needs to be done to engage with the leaders of these extreme groups to establish dialogue and come to a resolution.

“There is no place for this in Leicester and we are confident that we will overcome this.”

I have lived in Leicester for more than 26 years, and as a Hindu I have friends from all religions.

Our children have gone to school together, they have played together, and now they work together.

It is the way it has always been and stems from a shared history, shared culture and shared respect.

That does not mean we talk merely about the weather. Like most people, we put the world to rights regularly, and when we disagree, we agree to disagree.

In the time I have lived in this city, I have never felt there were no-go areas among south Asian communities.

As a family, we get our groceries from wards with a Muslim majority. We have always felt safe.

We, along with our Muslim friends, will eat in restaurants where the majority are Hindus. We have never experienced bigotry.

This week, I have been interviewed by several media outlets, asking for my insights into the “sudden disorder” and “why the mayor and police were caught off guard”.

This is because in 2001, I witnessed the segregation of parts of England along the fault lines of race; reported on the rise of right-wing extremists; and chronicled the explosion of violence in the north of England.

The fact is that the tensions in Leicester should not have come as a surprise to anyone.

Although we have lived harmoniously side by side, it does not mean that everything is fine and dandy.

My experience from more than 50-years in this wonderful country is that anything can light the fuse which sparks incendiary violence. No-one seems to need an excuse.

I know it is easy to say this in hindsight.

But I have been talking about the influence of politics from the Indian sub-continent coming to UK streets for more than two decades.

We saw that when the Labour Party – under Jeremy Corbyn – criticised India for its administration of Kashmir at its 2019 conference.

We saw that during that year’s general election when Hindus used WhatsApp to tell colleagues that ‘if you voted for Labour, you could not a true follower of the faith’.

We saw that during the Batley and Spen by election in July 2021.

Labour sent leaflets of former prime minister, Boris Johnson, shaking hands with his Indian counterpart, Narendra Modi, with the words “Don’t risk a Tory who is not on your side”.

And we saw that in May’s local election when Harrow council in northwest London, which was Labour controlled since 2006, lost to the Conservatives.

Sources told me that it was because Hindus had campaigned along religious lines.

Yet no-one, not our political leaders, not our civic leaders, and certainly not our religious leaders, wants to acknowledge, never mind discuss the possibility, that this is a bad thing.

Why? Because in 2010, the English Defence League held a march in Bradford. It was from the same play book as the British National Party, the National Front and Combat 18 of 2001.

Agitate enough and wait for it to kick off.

Only this time, community elders asked their youth not to bite.

Women put themselves in harm’s way, acting as human shields between EDL and Asian youth, to prevent a repetition of a decade earlier.

To their credit, the Asian communities showed huge tolerance and huge maturity, and the danger passed.

Like then, sources are blaming the youth of Leicester for no longer listening to their elders.

The battle between young and ageing bulls is as old as time itself, but we have a new danger we did not have before.

In 2001 social media was not as influential. Today, a myth is half-way around the world with the truth not only unable to catch up but giving up completely.

It is worse than the wild west because our thoughts, beliefs, anger, no matter on what they are based, have an outlet with the click of a button.

We do not think about the consequences.

No-one can be 100 per cent certain why things kicked off in Leicester.

Sources have told me it was a cricket match. Others say it was outsiders who do not understand the city or its relationships.

The answer is probably more nuanced, with the real reasons buried, waiting to be discovered like a prospector mining for gold.

It is easy to blame, yet it is far more difficult to accept and take responsibility.

I am clear these tensions will go away. I am confident wiser heads will prevail.

But I do not see this happening unless the different groups speak with one another continually, with soft voices, respect and tolerance.