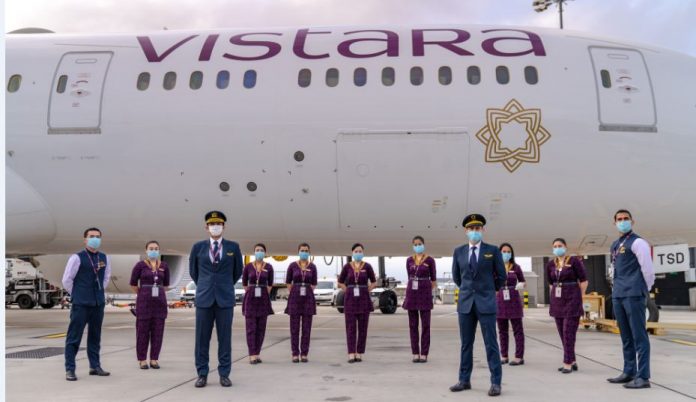 VISTARA, a joint venture of Tata Group and Singapore Airlines, has become the first Indian airline to offer in-flight wi-fi internet connectivity to its passengers.

The airline started the service from Friday, September 18, on its Boeing 787-9 Dreamliner aircraft between Delhi and London Heathrow.

The wi-fi service, which Vistara plans to also launch on its Airbus A321neo aircraft soon, is free of charge initially, for a limited period.

Passengers can access the internet on all wi-fi enabled mobile phones, tablets and laptops, courtesy of the in-flight wireless connectivity by Panasonic Avionics.

The airline, brought to you by Tata and Singapore Airlines, will operate non-stop flights between Delhi and London till October 24, the company said.

The flights were launched on August 28 as part of the bilateral ‘transport bubble’ formed between India and the UK.

During the period, Vistara will fly three times a week between the two cities – on Monday, Wednesday and Friday.

“We are delighted to offer on-board wi-fi internet connectivity which takes our on-board travel experience to truly global standards. We are also glad to be the first Indian carrier to be able to offer this service to our customers,” said Vinod Kannan, Vistara’s chief commercial officer.

“We truly hope our customers enjoy this new addition as we continuously strive to surpass their expectations.”

According to Vistara, the new In-Flight Entertainment (IFE) system allows customers to access a library of nearly 700 hours of movies, TV shows and audio compilations and games.

The airline has introduced a food and beverage service in line with the latest health and safety norms. Aircraft interiors will be deep-cleaned after every flight using approved cleaning agents, said the company.

Vistara CEO Leslie Thng said the company will increase the number of daily flights to 100 from 80 by the end of this month.

Prior to the coronavirus pandemic Vistara was operating more than 200 flights to 34 destinations every day.

Vistara commenced its commercial operations on January 9, 2015. It has a fleet of 40 aircraft, including 31 Airbus A320, one Airbus A321neo, six Boeing 737-800NG, and two Boeing 787-9 Dreamliner aircraft, and has flown more than 20 million customers since starting operations.