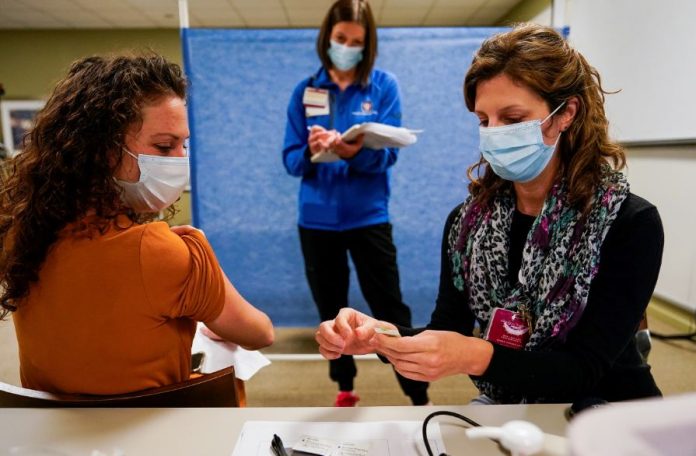 THE US health authorities, shipping services and hospitals stood ready to immediately launch a mass-inoculation campaign of unparalleled dimension, as federal regulators granted emergency approval to the first Covid-19 vaccine in the US.

Last-minute preparations for the vaccine rollout came as the US death toll from the coronavirus pandemic approached 300,000 to date, capping weeks of ominously surging infections and hospitalisations that have strained healthcare systems to their limits.

Another 2,902 US deaths were reported on Thursday(10), a day after a record 3,253, a pace projected to continue over the next two to three months even as distribution of available vaccine supplies ramps up.

The first shots are expected to be administered within days, spearheading an effort widely seen as pivotal in ultimately vanquishing a pandemic that has upended daily life in the US and devastated its economy.

President Donald Trump said on Friday(11) night that vaccinations would begin in less than 24 hours.

Moving with unprecedented speed, the US Food and Drug Administration (FDA) approved emergency use of the coronavirus vaccine developed by Pfizer Inc with its German partner BioNTech.

Britain, Bahrain, Canada, Saudi Arabia and Mexico have already approved the Pfizer vaccine, and the US advisory panel is due to review a second vaccine, from Moderna Inc, next week.

Other vaccine candidates are in the works as the US gears up for a campaign evocative of the polio inoculations for children during the 1950s and 1960s.

Delivery companies United Parcel Service and FedEx Corp stood ready to ship millions of doses across the country, giving top priority to the vaccines over other packages on their airplanes and trucks.

Plans call for US marshals to provide security for vaccine shipments from manufacturing facilities to distribution sites, including acting as escorts for delivery trucks.

“This is unprecedented because it’s not just about logistics, it’s about making sure we win public trust, it’s about ensuring equity,” de Blasio told a news briefing.

New York state expects to receive 346,000 doses of the Moderna vaccine the week of December 21, on top of the 170,000 Pfizer doses coming this weekend, Governor Andrew Cuomo told a news conference.

Healthcare workers and elderly people in long-term care facilities are expected to be the main recipients of a first round of 2.9 million shots this month, with initial limitations on supplies meaning most of the general public will have to wait months for the vaccines to become widely available.

The Indiana University Health center, one of the first hospitals designated to administer the vaccine, rehearsed its vaccination procedures on Friday, with pharmacists, nurses and doctors taking part in drills for storing, transporting and giving actual shots to patients.

“We want to make sure that we are perfectly ready and open with a bang,” said Kristen Kelley, director of infection prevention at IU Health.

The US rollout faces significant logistical challenges to meet president-elect Joe Biden’s goal of inoculating 100 million people – about a third of the US population – within 100 days of his inauguration on January 20.

But any American who wants a vaccine should be able to get one by May or June, assistant US health secretary Brett Giroir told Fox News .

In the meantime, grim statistics continue to pile up as more than 200,000 US cases per day were recorded for four straight days, with another 220,815 cases on Thursday, according to a Reuters tally of official data.

The United States has reported about 15.6 million known infections as of Thursday.

US Covid-related deaths are projected to surpass 500,00 by April 1, according to an influential model by the University of Washington’s Institute for Health Metrics and Evaluation.