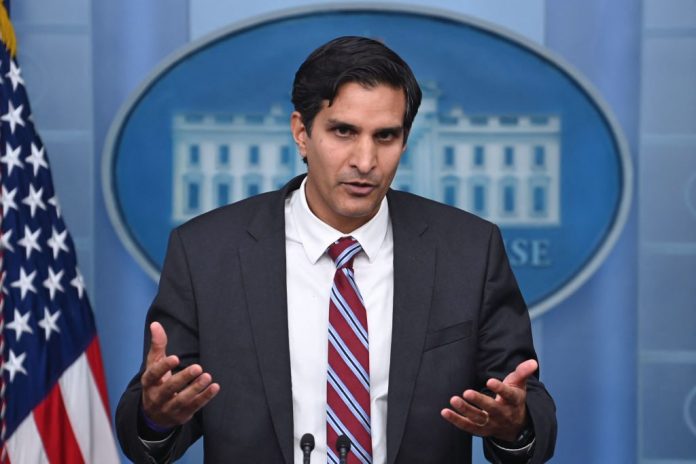 US president Joe Biden’s deputy national security adviser for economics Daleep Singh will be in New Delhi on March 30 and 31 to meet government officials to discuss Russia’s war against Ukraine and develop an economic framework for the Indo-Pacific, the White House said.

“Singh will consult closely with counterparts on the consequences of Russia’s unjustified war against Ukraine and mitigating its impact on the global economy,” said Emily Horne, spokesperson of the National Security Council of the White House.

Horne said the top official will also discuss priorities of the Biden administration, including the promotion of high-quality infrastructure through Build Back Better World and the development of an Indo-Pacific Economic Framework.

In New Delhi, Singh will continue the US administration’s ongoing consultations with India, and advance a range of issues in the US-India economic relationship and strategic partnership.

He will meet Indian officials to deepen cooperation to promote inclusive economic growth and prosperity, and a free and open Indo-Pacific, Horne said.

The preparations for the upcoming ‘2+2’ foreign and defence ministerial dialogue in Washington next month are also likely to figure during Singh’s visit. The dialogue is likely to take place around April 11.

Singh, 46, is the great-grandson of Dalip Singh Saund, the first Asian American elected to the Congress. He has a Master of Business Administration and Master of Public Administration in international economics from the Massachusetts Institute of Technology and the Harvard Kennedy School.

Meanwhile, Russian foreign minister Sergei Lavrov will also visit India this week. New Delhi has called for an immediate ceasefire in Ukraine but has refused to explicitly condemn Moscow’s actions. India has also abstained from voting on multiple UN resolutions on the war.

Last week, Biden said only India among the Quad group of countries was “somewhat shaky” in acting against Russia over its invasion of Ukraine.

The South Asian nation has tried to balance its ties with Russia and the West but unlike other members of the Quad countries – US, Japan, Australia – it has not imposed sanctions on Russia.

Russia promised on Tuesday (29) to scale down military operations around Ukraine’s capital and north, while Kyiv proposed adopting neutral status, in confidence-building steps that were the first signs of progress toward negotiating peace.