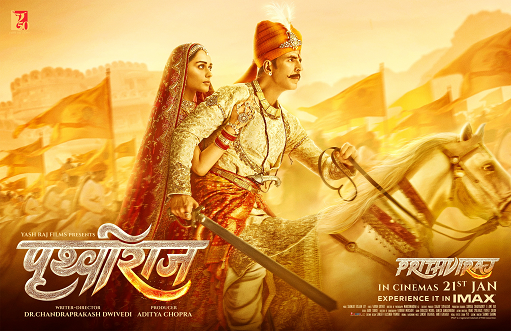 YRF’s Prithviraj starring Akshay Kumar, Sanjay Dutt, Sonu Sood, and Manushi Chhillar is undoubtedly one of the most awaited films of 2022. The movie was slated to release in 2020, but was postponed due to the pandemic.

Now, finally, the film is slated to hit the big screens on 21st January 2022, and on Monday (15), the makers unveiled the trailer of the film.

Kumar took to Twitter to share the trailer with his fans. He tweeted, “A heroic story about pride and valour. Proud to play Samrat #Prithviraj Chauhan. Celebrate #Prithviraj with #YRF50 only at a big screen near you on 21st January’22. @ManushiChhillar @duttsanjay @SonuSood #DrChandraprakashDwivedi @yrf.”

The movie is a biopic on King Prithviraj Chauhan and Kumar plays the titular role in it. Former Miss World, Manushi Chhillar, will be making her acting debut with the film.

The teaser of Prithviraj is decent and it looks like a grand film, but there are a couple of scenes that remind us of Bajirao Mastani, Padmaavat and even Panipat; maybe because it is a period film just like the others.

While talking about the teaser, Kumar in a statement said, “The teaser of ‘Prithviraj’ captures the soul of the film, the essence of the life of the legendary warrior Samrat Prithviraj Chauhan, who knew no fear. This is our tribute to his heroism and his life. The more I read about him, the more I was awed by how he lived and breathed every single second of his glorious life for his country and his values.”

“We hope that Indians worldwide love our salute to this mighty braveheart. We have tried to present his life story in the most authentic way possible and the film is a homage to his unmatched bravery and courage,” he added.

Well, the teaser has been released and reportedly, the trailer will also be out soon and it will be attached with YRF’s another film Bunty Aur Babli 2 which is slated to release on 19th Nov 2021.