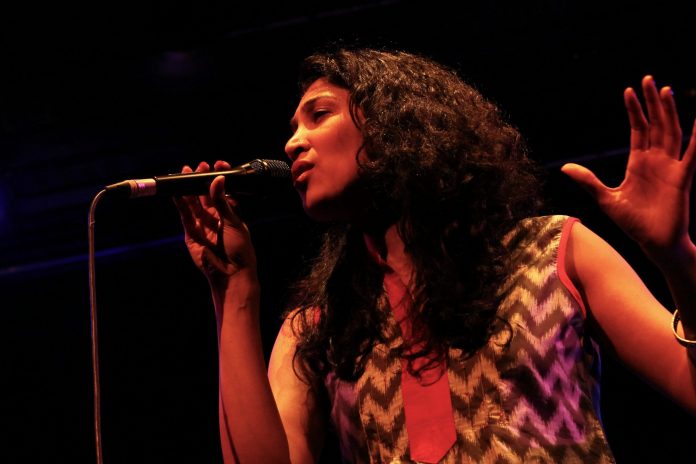 A BIG highlight of this year’s Women In Arts festival is a performance by British Bengali fusion band Khiyo. The talented collective mix up varied influences, including western classical, rock, jazz, blues, Nazrul Sangeet, Bengali folk and Indian classical, to create a unique musical sound, which has delighted cross-cultural artists since they got together.

Versatile lead singer Sohini Alam has been a big driving force behind one of UK’s best kept musical secrets and was happy to discuss the band with Eastern Eye. She also spoke about performing live, close connection to her heritage, future plans, and deep love for music.

What first connected you to music?
I was born into a family of musicians, so am a third-generation singer. My family includes eminent Bangladeshi singers Ferdous Ara and Jannat Ara, which meant that we had a music school in our family home in Bangladesh. My earliest memories are of my mother teaching me (and many others) to sing here in London.

Tell us about Khiyo and how the band was formed.
I left London when I was nine and didn’t return for a long time. After returning I met Oliver Weeks who had been working with noted Bengali singer-songwriter Moushumi Bhowmik. He and our bass player Ben Heartland were in a band called Parapar with her. She happened to move from London to Kolkata around that time, so there was a Bengali-music-shaped hole in Olly’s life (laughs). Olly and I started jamming together and then Ben joined us.

What happened next?
After many sessions of music and food, we began to find our sound. It was a matter of time before we were playing our arrangements of Bengali classics in public. I felt while the vocals were almost always incredible, many of the arrangements of traditional songs didn’t seem to convey the vibe I got from the lyrics. Forming Khiyo was my way of expressing myself as a third culture individual.

What inspired the name?
Olly and I found that most Bangladeshi bands tended to have English names. As we were a London band making Bengali music, it was important for us to have a Bengali name. Olly had been going through his Bengali dictionary and pointed to the letter Khiyo. It worked for us as it is the amalgamation of two sounds (k and sh), which is similar to our concept of presenting Bengali music with a London sound.

How would you describe your journey?
At first, it was about finding our sound. Some songs seemed to flow almost effortlessly while others required a lot of working through the material to find natural commonalities between different styles of music that influenced us. This was because we started by finding new interpretations and arrangements of Bengali heritage music, but we have since evolved to composing and arranging our own original music too.

How would you describe your sound?
It’s really difficult to describe our sound, which is best heard and interpreted by the listener. The closest we’ve managed to get is to call it Bengali music with a London sound because we’re from this amazing city that has one of the most diverse music scenes, thanks to people from all over the world here. I often have to make do with describing it as Bengali music meets western classical meets jazz meets folk meets rock. So, there are a lot of ‘meetings’.

How much does live performance mean to you and which has been the most memorable?
Nothing I record could quite capture the power of a live performance. The vibe from the audience is magical, so being able to perform live feeds my soul. I can’t pick one performance though. Memorable could mean an amazing gig and/or one during which I fell over on stage (I do that far too often).

Which of your songs has been closest to your heart?
I can’t answer that simply because each of the songs I sing expresses a different aspect of me or how I feel at any given time. It’s like being asked about my favourite child (I only have one, so that’s an easy question actually!).

How much are you looking forward to the Women in the Arts Festival?
Very, very much. There seems to be more talk about representation than action, so to be involved with an event that is actually highlighting the work of women in the arts is wonderful. I am grateful to Jay Visvadeva for taking the initiative.

What can the audience expect from your live show?
Energy, introspection, and heart! We did a trio gig at SOAS last year, and a member of the audience said to the organiser Georgie Pope, “I expected the evening to be intellectual, maybe a bit dry. What I got instead was a rock star in a sari’.” That had me thinking, maybe I should keep expectations low so people can be pleasantly surprised.

What is it that keeps you so connected to your heritage?
Our lyricist Leesa Gazi talks about how her father once explained to her that she could change her religion, clothes, accent, and everything, but not her ethnicity. I think this is very true. Despite my British nationality, at home and abroad, I am often asked about my origins. I have moved away from being offended at not being considered ‘British enough’ to acknowledging that my skin (among other things) speaks to my heritage. I have embraced my roots with the enthusiasm of a traveller who finds glimpses of home in everything. I am multiple things, and they matter to me, so constantly learning about my heritage is part of that.

Who is your musical hero?
I’ve never thought of this mainly because I don’t think I could have only one musical hero. There are musicians who inspire me with their virtuosity, drive, creativity, etc., and they aren’t rolled into one being. That said, I have to credit my mother and aunts for heroically sticking to their guns when teaching me music, because I wouldn’t have had the skills to do this without their efforts, as I used to try skipping music lessons as a child.

Why do you love music so much?
I don’t know any other way. I was born into a family that makes music. I spent half my life running away from becoming a professional musician because I saw up close how difficult it could be. Then one day, I was offered a tour that meant quitting my office job, and there was no question that I would do the tour, so I guess the love made itself known without waiting for me to acknowledge it.

Khiyo performs at Grand Junction in London on March 26 as part of Women In The Arts festival. Visit www.khiyo.com, www.sama.co.uk and www.grandjunction.org.uk