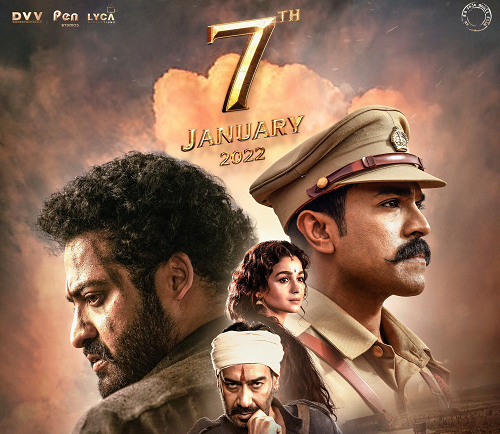 SS Rajamouli’s RRR is undoubtedly one of the most awaited films of 2022. The movie is shot in Telugu, but liked the director’s previous film Baahubali franchise, RRR will also be dubbed and released in various languages.

Moviegoers in India as well as internationally have been eagerly waiting for RRR to hit the big screens. Their wait will get over on 7th January 2022, and on Monday (1), the makers unveiled a glimpse of the film.

The official Twitter handle of the movie tweeted, “The era of #RRRMovie has just begun! Presenting the much anticipated #RRRGlimpse… https://youtube.com/watch?v=Xsgz7Q0iWzA Let’s together bring back the glory of Indian cinema. In cinemas from 7th Jan 2022. @ssrajamouli @tarak9999 @AlwaysRamCharan @ajaydevgn @aliaa08 @oliviamorris891 @DVVMovies.”

The teaser clearly showcases that it’s a grand film, and that is something we expected by Rajamouli. It gives a glimpse of Jr NTR, Ram Charan, Ajay Devgn and Alia Bhatt.

Well, one thing that grabs our attention in this glimpse video is the background score. It is simply excellent.

RRR is a fictional story about two Indian revolutionaries, Alluri Sitarama Raju and Komaram Bheem, who fought against the British Raj and Nizam of Hyderabad respectively.

While there are many films releasing in next two months, but one film that can surely get audiences back to the theatres in RRR.

RRR will be clashing at the box office with Sanjay Leela Bhansali’s Gangubai Kathiawadi (6th January 2022) which stars Alia Bhatt in the lead role, and Ajay Devgn will be seen in a pivotal role in it.