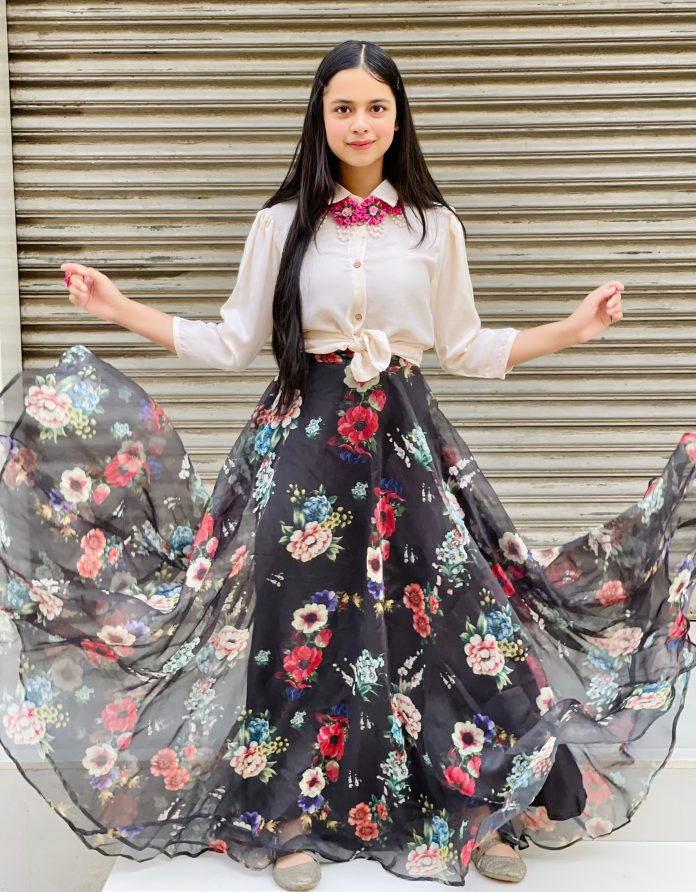 She began her acting career on television, then hit the silver screen and followed it up with a rewarding foray into the digital space. We are talking about teen star Nitanshi Goel. At just the young age of thirteen, Goel already has such a vast spectrum of exciting projects under her belt. Her strong resume is enough to give several actors of her age or even older a run for their money.

The girl with limitless talent is presently waiting for the release of her film Masoom Sawaal wherein she plays the leading role. Written and directed by Santosh Upadhyay, the film has been produced by Ranjana Upadhyay under the banner of Nakshatra 27 Media Productions and is expected to release once the Covid-19 situation eases in India.

In a candid conversation with Eastern Eye, Nitanshi Goes talks about her character in Masoom Sawaal, what makes it relatable, her expectations from the film, and, of course, her forthcoming projects.

What was the first thought you had in your mind when you heard the script of Masoom Sawaal for the first time?

I got super excited after hearing the script. It is a dream of every actor to play a role which is not only relatable but also inspires everyone, roles like Taapsee Pannu ma’am played in Thappad (2020), Kangana Ranaut ma’am played in Manikarnika: The Queen Of Jhansi (2019) and Deepika Padukone ma’am played in Chhapaak (2020). I find myself extremely lucky that at the age of thirteen, I am getting an opportunity to play such a strong character in Masoom Sawaal. I still remember the moment I was finalized for the part, my mom had tears of happiness in her eyes and we both hugged each other. It was a very emotional moment.

How challenging was it for you to bring the character of Niyati to life?

Playing the character of Niyati was both easy and challenging for me. It was easy because in real-life, I am just like Niyati, nature wise. Also, when you watch the film, there will be many moments where you won’t be able to stop yourself from crying. To bring that pain and that intensity in the film as well as my character, I used to break my contact with the external world and try to connect with Niyati internally. I still remember that after the director would say cut, the entire crew and team would take a minute or two to come out of those scenes. They would then and clap and cry, both at the same time. But it used to take me hours to get out of those scenes. Such was the impact!

Niyati is a young and confident teenager of this generation, just like me. If something wrong is happening in front of my eyes or I am being bided by certain wrong restrictions, then obviously I will be wanting to know some logic or reason behind it. As to why I must follow it and why is it right for all. So, I feel all the girls of this generation will surely be able to relate to this character, as Niyati is a medium to fight and raise our voice against social evils. I just love being Niyati.

Were you able to relate to the character as soon as you heard the story?

As I mentioned earlier, I and Niyati share the same nature so, yes, I was able to relate to this character in the first instinct only.

How is your character different from you in the real-life?

I and Niyati are same on a personal level. The relationship that Niyati and Laddu Gopal share in the film is very similar to what I share with Shri Krishna in my real-life. I am also a single child and have always seen Krishna as my brother. I also take a stand for what is right. I am also caring and really attached to my family. Apart from that, it was difficult for me to connect with the character and the surroundings because I come from a family who is very supportive, broad-minded and encouraging of whatever I wish to do, which is not the case in the film.

On the sets of Masoom Sawaal, who else, according to you, was exactly like their character?

I guess Rohit Tiwari sir, who plays my father’s role in this film. He is exactly like his character.

How was your equation with the director Santosh Upadhyay and crew on the sets?

I share a very emotional bond with Santosh sir. While shooting light scenes, where I was smiling and enjoying, I could see Santosh sir also smiling. During emotional scenes, even sir used to have tears in his eyes. After every emotional scene, he used to just come to me, hug me and say words like ‘adbhut’, ‘avishwasniya’, ‘God-gifted’. I still crave those words. Santosh sir is like a father figure to me.

What are your expectations from the film?

If every girl watching this film walks out of the theatre feeling empowered, then I guess the reason for making this film will be achieved.

You have shown your talent on all platforms like television, films and web shows, which platform do you feel gives you more creative satisfaction?

Yeah, I have worked for all the platforms now and each offers you different experiences and advantages. Frankly, right now I am more focused on the character than the platform.

What is next in the works for you?

There many projects lined-up. Shoot for my next films will commence soon. I would also like to share that during the lockdown, I have uploaded some clips of mine on various short video apps in the name ‘Nitanshi ki boli’ and I am amazed with the magical response that I have been receiving. Millions of people are loving it. Also, I have got an opportunity to host a television show. So, hoping for the best. Fingers crossed!