Home HEADLINE STORY Raab says benefits of a free-trade agreement between UK and India will... 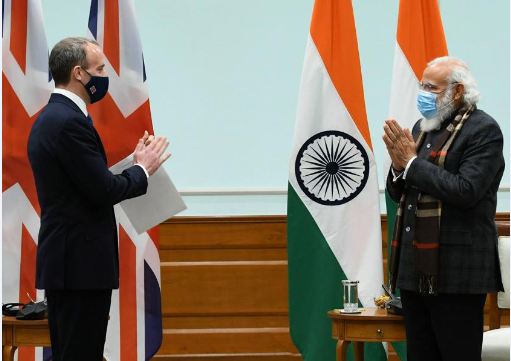 THE UK foreign secretary Dominic Raab has said that the mutual benefits of a post Brexit free-trade agreement between UK and India would be ‘enormous’.

He, however, added that such a deal could take many years.

Responding to questions on the ongoing farmers’ protests in India, Raab said that India has a vibrant heritage of ‘peaceful protests’ and ‘vigorous debate’.

He revealed that he had discussed the situation with external affairs minister S Jaishankar and underlined that the country’s policies will affect the UK because of the Indian diaspora in Britain.

Though the UK government wouldn’t hold back from concerns about India’s human rights issues, it wouldn’t allow that to eclipse broader co-operation, he said.

Recently, British MPs of Indian origin had raised the issue of farmers’ protests in the parliament.

When asked about China’s rise and belligerence in the Indo-Pacific and the India-China border this year, Raab said that the rise of China provides the strategic context and there are opportunities as well as risks.

He added that the UK and India can cooperate on cyber and countering misinformation and in the maritime sphere.

When asked about the extradition of the fugitives, he said there are still some outstanding legal issues which are independent from politics or political intervention.