Home Arts and Culture Pooja Hegde: When the stars align 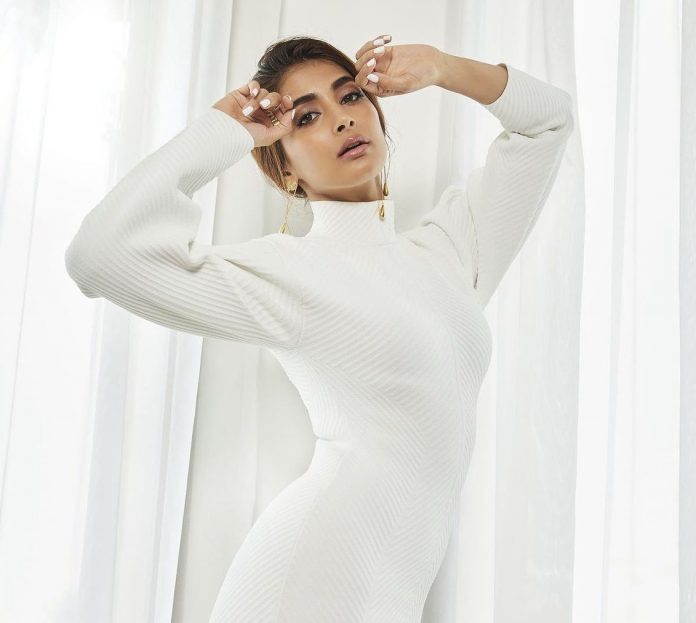 BEAUTY queen turned actress Pooja Hegde has made an impressive rise since making her film debut with 2012 Tamil-language superhero flick Mugamoodi and now firmly established herself as one of the most-sought-after actresses in India.

Her latest offering is mega-budget period romance Radhe Shyam, opposite pan-Indian superstar Prabhas, which has been much talked about and is visually striking. Eastern Eye recently got the opportunity to sit down with the multilingual star to discuss her new film, the character she plays, thoughts on astrology and sizzling chemistry with Prabhas.

How does it feel to see Radhe Shyam finally getting a theatrical release after pandemic related delays?
The experience of seeing a film in theatres is different, I feel. I recently saw Tamil film Sarpatta Parambarai (2021), which revolves around boxing, on OTT. I remember watching with my parents and we were screaming, shouting and clapping. And I was like, had it been released in the theatres, it would have been a completely different experience. So, I feel some films are meant to be seen on the big screen, like Radhe Shyam. The producers have invested so much in it because this has to be a visual treat. It should be like a fantasy land and dream world, so if you watch in theatres, it’s definitely going to be a visual treat. I am happy the occupancy has become 100 per cent now. So, follow all the protocols and enjoy the film in cinemas.

Radhe Shyam has been made in multiple languages, including Hindi. What’s the reason for the huge gap since your last Hindi release Housefull 4?
It was a conscious decision that I should not do films for the sake of it. I am being very honest and unguarded. I come from a very academically-driven family, where nobody was related to movies. When your first film doesn’t do well and you do not come from a film family, it is very difficult to get another one. Having said that, I did get films after Mohenjo Daro (2016) (didn’t do well), but not something I loved or was excited about. At the same time, south films were coming, and they were interesting. So, I thought that since south Indian cinema was giving me huge respect and loads of love, I should concentrate on that.

What made you do Housefull 4?
Because the banner was big. It was Nadiadwala sir and half of it was Akshay Kumar. I am glad I did it because that gave me (forthcoming film) Kabhi Eid Kabhi Diwali. It is not that I should concentrate on one particular language. I feel languages have a power. If I speak a few lines in Gujarati or Punjabi, you will feel happy about it. Because of the magic of languages, there is an instant connection. I feel that when you act in somebody’s language, it brings you closer to them. I’m so happy audiences have accepted me across industries. They treat me like I am one of them and I don’t want to let go off that, whether it’s with Tamil, Telugu, or Hindi. If tomorrow a good smaller Marathi film is offered to me, I will gladly do it because it excites me as an artiste and connects me with more people.

The film Radhe Shyam has an astrological theme. What are your thoughts on astrology?
I really believe in astrology. I think it’s a science. My father always says that if you go to a regular doctor and if he gives you a wrong medication by chance, you say the doctor was not good. But if you go to an astrologer and if his prediction goes wrong, you say astrology is wrong. Maybe you never met a good astrologer, so we need to cut ourselves some slack. Indian science also has a lot of power and meaning.

Are there any personal experiences?
Of course, I’ve had great advice related to my career. But also, I am a strong believer in the magic that rests in our hands. I believe that it’s the greatest. If you look at my Instagram bio, it’s Atlas hands. They are like a map. One of them tells us what we have done in our lives, and also it means that wherever you want to go, it is all in your hands. I also am a strong believer in working hard and creating your own destiny, so believe in both.

Unlike Bollywood, regional cinema gives a complete character arc to female protagonists. What do you think about that?
It’s great that it’s happening. Even with Radhe Shyam, you are going to see Prerna as a proper full-bodied character. It’s a love story, and my character is very strong. As a girl I feel that when I see someone on screen, I relate to them. I have always looked for that in characters I take up, which is why I consciously want to do an action film. I want to inspire another generation because when I see Hema Malini fight villains in Seeta Aur Geeta, I feel good and empowered. Or when I see Gal Gadot as Wonder Woman, it excites me. If I see Angelina Jolie look good but still beating up bad guys in Mr and Mrs Smith, I feel great as a girl. I hope more Indian films come up where, girls are stronger and more resilient. I am glad that it is happening slowly. You are a happy-go-lucky girl and playing a similar character on-screen.

The chemistry between Prabhas’ character Vikramaditya and Prerna is electric in Radhe Shyam…
I feel chemistry is God-gifted. Some magic must happen for chemistry to happen. I am glad that you and so many others are saying that. I am also happy that people tell me that my chemistry has been very good with all my co-stars. Whether it’s Allu Arjun, Akhil (Akkineni), or Hrithik (Roshan).

You have lived with this character for almost four long years. What has the experience been like?
Oh my God! I think you should ask the director. I am very possessive about my people and characters. I have lived Prerna for four years, as you clearly said. I think you are going to see me evolve as an actor in the film. I am pretty sure after you watch the film, you will tell me, “Oh, you were brilliant in that scene!” I have worked so much in these four years that you are going to see me grow and see Prerna grow. Also, I have travelled with this film so much and built up a backstory about her.

Tell us about that…
Her relationship with her grandmother. Maybe she treated her grandmother like her best friend, maybe she had no best friend. When you begin playing the same character after a gap, at times it becomes difficult to get into the skin of the character again because you have sat at home. But somehow, maybe I worked so much on the character initially, I did not feel that happening to me. I am very possessive about Prerna. I hope that when you watch her, you feel like nobody else could have done it.